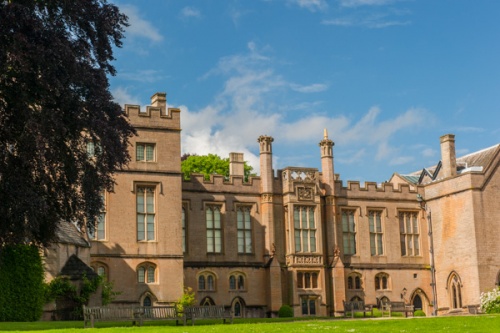 Newstead Abbey began as a 12th century Augustinian priory (the west front of the priory church still stands), but it is most famous as the ancestral home of Lord Byron, at least until his debts forced him to sell the house in 1817. The interior holds an extensive exhibit of Byronian mementos. 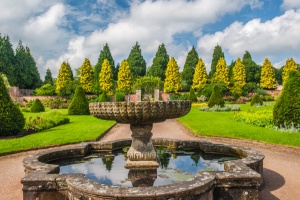 Newstead Abbey was founded around 1170 for the Black Canons of the Augustinian order. The abbey's location near the royal hunting ground of Sherwood Forest meant that it was required to host royal visitors on numerous occasions, and the cost of doing so stretched the finances of the abbey.

Edward I is known to have stayed at Newstead on 4 occasions, and despite the honour, one can't help but wonder of the canons were pleased to see the back of the king and his retinue when they finally left.

Newstead was dissolved by Henry VIII in 1539, and the house was sold to Sir John Byron, Lieutenant of Sherwood, for 810 pounds. Sir John was followed by his son, also named John, or, more colourfully, by the moniker 'Little Sir John of the Great Beard'. This second Sir John Byron is said to haunt the Abbey grounds, just one of several ghostly figures seen at Newstead over the years.

Generations of Byrons transformed the medieval abbey into a grand residence, though they did not dispense with the abbey, but incorporated it into the house as it grew. Many of the original abbey features were left more or less intact, including the cloisters, refectory, kitchen, and the stew pond where the canons kept fish. 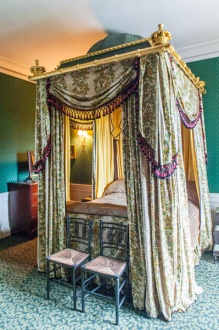 The Byrons supported the Royalist cause in the Civil - though they didn't always do a good job with that support; Sir John Byron broke ranks at the Battle of Marston Moor and charged the Parliamentary army without waiting for orders.

His indiscipline probably cost King Charles the battle, but Charles must have forgiven him, for the king made him a baron. Byron was exiled, and the Abbey confiscated, then in 1644 Parliamentary soldiers from Nottingham looted the house. Sir John's heir was later forced to buy back his family home.

The 5th Lord Byron of Rochdale was known as the 'Wicked Earl' and 'Devil Byron' for his violent temper and scandalous behaviour. Running amok did not seem to shorten his life, however, for both his son and grandson predeceased him. He spent the last years of life living in one room, entertained by his collection of tame crickets.

He was followed by the 6th Earl, George Gordon Byron. The 6th Lord Byron was the most famous of his line, a poet, self-publicist, and 'rock star' of the Regency era of Romantic poetry. It was said of Lord Byron that he was 'mad, bad, and dangerous to know', and the Newstead Abbey we see today is essentially a very large and very romantic museum to Byron's life and work. 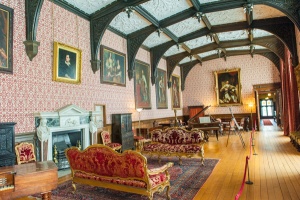 Lord Byron came to Newstead in 1798, at the age of 10. It could not have been a pleasant sight. The 5th Earl had left the house in perilously poor condition. The East wing was roofless, the refectory was used to store hay, and the kitchen as 'a heap of rubble'. The only dry room in the entire rambling mansion was the scullery. The Byrons had no money to repair the house, and let it out to tenants.

It was not until 1808 that Byron, newly graduated from Cambridge, moved into Newstead. He had a room in the old Prior's Lodging repaired enough to serve as a bedchamber, and used the rectory hall as a shooting gallery to practice with his pistol. A cell off the old abbey cloisters was flooded to serve as a plunge bath. He held wild parties which, according to one account, included drinking from a human skull filled with brandy.

Byron only lived full-time at Newstead for one year, but the crumbling old house and monastic ruins made an indelible impression, and inspired some of his more Gothic forays into romantic poetry. In 1817 he sold Newstead to a school friend named Colonel Thomas Wildman, and never returned.

The Newstead we see today is essentially two distinct places; the monastic ruins, and the family home, which incorporates many of the old monastic buildings. The most impressive part of the abbey ruins is the superb west front, which must be among the best-preserved monastic facades in England. As for the house, it is like a rabbit warren, with corridor after corridor leading through a bewildering succession of rooms, most filled with Byronian memorabilia.

You can see Byron's bedchamber, with his own pistol laid out on a night table beside the gilded bed which he brought here from his student digs in Cambridge. Read letters and manuscripts penned by Byron and see drawings, family furniture, and the desk where he wrote much of his most famous poetry. There is a large collection of Victorian photographs showing how the abbey looked in the late 19th century.

The house is set in a glorious landscape garden incorporating many of the medieval abbey features. Winding paths lead through a Japanese garden, fernery, French garden, Spanish garden, and past herbaceous borders. There is a lovely formal ara with a small walled garden and rose garden, and the Great Garden laid out beyond the monk's stewpond.

Newstead is a place you could spend as long as you want, and always find something new and interesting you hadn't noticed before. If you enjoy Lord Byron's poetry, this is heaven, but even if you don't know your Byron from your Wordsworth, your Corsair from your Ancient Mariner, it is still a wonderful historic house with an superb garden and parkland. Newstead is an absolute delight to visit. 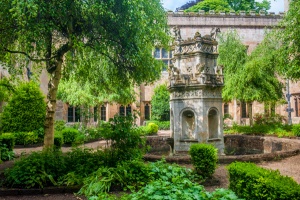 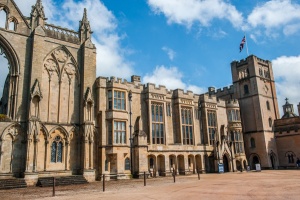 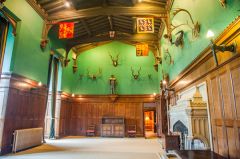 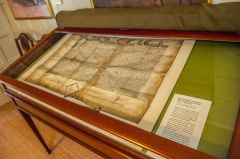 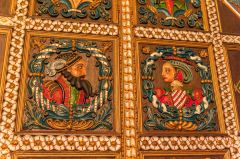 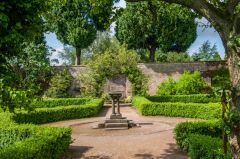 More self catering near Newstead Abbey >>