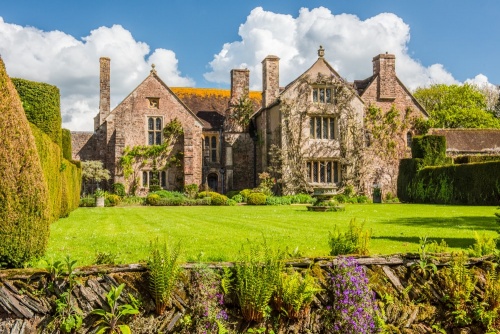 Cothay Manor is a romantic 15th-century manor on the water, open by arrangement for group visits and regularly during spring and summer to the general public. The manor is surrounded by 12 acres of superb gardens.

The manor at Cothay dates to around 1480, though it stands on the site of a much earlier hall house built by Adam Cothay in 1309.

In the early 14th century the Bluett family of Kittisford married into the Cothay family, but the Bluetts had other residences and it was not until 1457 that they actually lived at Cothay. In 1481 Walter Bluett rebuilt the earlier hall house and erected the gatehouse. In the Elizabethan period, the house passed to the Every family and around 1600 Wiliam Every altered the medieval manor to give it its present look.

The manor is built to a traditional late medieval pattern, with a screens passage giving access to a Great Hall. The Hall features a gallery at one end and a beautifully crafted timber roof, decorated with carvings of wingless angels bearing heraldic shields

Other chambers available to the public include a Great Chamber, Georgian Hall, Dining Room, and winter Parlour. In the second-floor Great Chamber is an unusual 14th-century Oculus window (a circular window opening). The Parlour has 1609 oak panelling installed by the Every family, though the oak was later painted to resemble walnut. The Every coat of arms embellish the overmantle in the dining room. 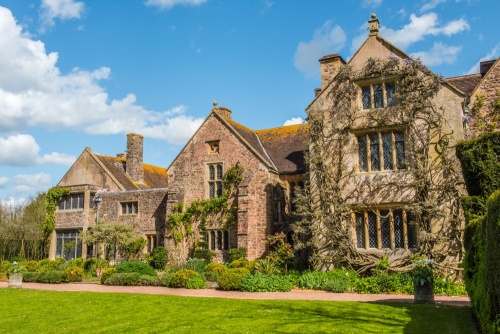 The rear facade of the manor house

Throughout the house you will see beautiful 17th-century wood panelling, stained glass windows, and a section of 15th-century wall painting, including an unusual depiction of Reynard the Fox. Most of the furniture is 17th century. Access is by guided tour, usually led by family members, helping emphasise that Cothay is very much a family home rather than a stuffy museum!

The perils of maintaining a historic house like Cothay were brought home to the owners several years ago when a military helicopter flew overhead and the vibration caused a section of wall painted with a medieval fresco to fall out. As a result of the incident low-flying military aircraft are now prohibited from flying over the manor house.

The main entrance is protected by a 500-year-old oak door, reinforced with an oak locking bar secured by a one-foot-long key. The door is provided with a peep hole to glimpse visitors approaching. Above the 14th-century porch is a 15th-century oratory.

Look for the arms of Walter Bluett adorning the battlemented gatehouse.

An article in Country Life magazine in the 1920s extolled Cothay as 'the finest example of a small medieval manor left in the Kingdom today'. 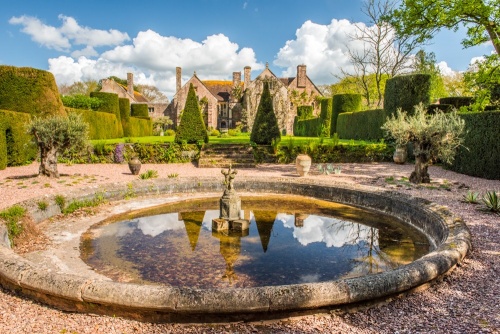 A fountain pond in the gardens

The celebrated gardens at Cothay date to the late 15th century. The story goes that to celebrate the end of the Wars of the Roses Richard Bluett planted both a red rose and a white rose on the terrace outside the manor.

That may have started the tradition of roses at Cothay, but the 12 acres of gardens we see today are primarily the work of Colonel Reginald Cooper DSO. Beginning in the 1920s, Cooper laid out a series of garden rooms, using lush colour, perfectly set off by the historic manor house. Cooper was friends with many of the great gardeners of the day, and friends such as Vita Sackville-West, Edwin Lutyens, Gertrude Jekyll, and Lawrence Johnston of Hidcote all would have seen - and possibly contributed ideas - to the gardens at Cothay.

Cooper is known to have helped Nicholson and Sackville-West design their famous garden at Sissinghurst Castle. Curiously, Cothay is sometimes called the 'Sissinghurst of the West', despite the fact that Cothay came first and influenced Sissinghurst, not the other way around!

One of the garden highlights is the Walk of the Unicorn, a shaded avenue of made from rows of Robinia pseudoacacia ‘Umbraculifera’ underplanted with massed tulips. According to tradition, the Unicorn avenue was created so that ladies could exercise their unicorns, which by tradition were only visible to virgins. Near the house are a variety of small garden rooms, each with a different character and set off by high hedges of yew. 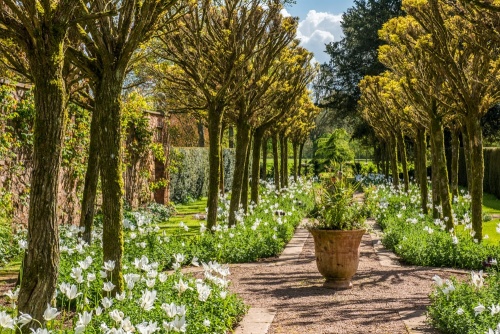 The Walk of the Unicorn

In contrast to the formal garden areas like the Unicorn Avenue is the 'natural garden' running alongside the River Tone. At the far end of the gardens are wildflower meadows, rich in colour when we visited in spring.

You can still see red and white roses on the terrace, but the gardens now include thousands of white tulips in spring, and in summer the gardens are a symphony of colour, with azaleas, a cottage garden, a yew walk, bog garden, riverside walks, and drifts of primulas. The result is a garden that has been lauded as one of the 20 best in England, according to a feature in the Daily Telegraph.

We met the house owner while we were exploring the gardens and she kindly told us which parts of the garden were in full bloom and shouldn't be missed - and she was right.

Cothay Manor can only be reached down very narrow country lanes. There is parking on the grass near the stables, and you have to follow arrows through the stable yard and around the side of the house to the tearoom.

Be aware that the house is only open for tours on specific days; please check the official website for dates and times. The garden is regularly open during the main visitor season, and is well worth exploring even if the house is closed.

As a final note, the house name is pronounced 'Cott-ay', with a silent 'h'. 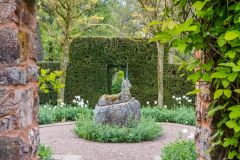 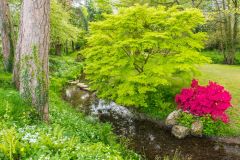 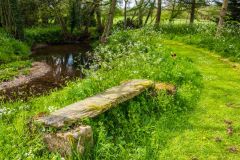 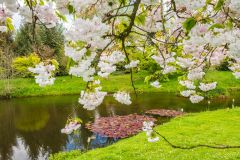 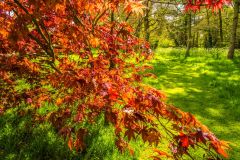 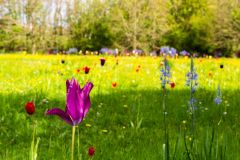 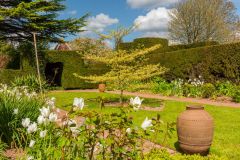 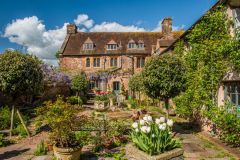 More self catering near Cothay Manor and Gardens >>

More bed and breakfasts near Cothay Manor and Gardens >>