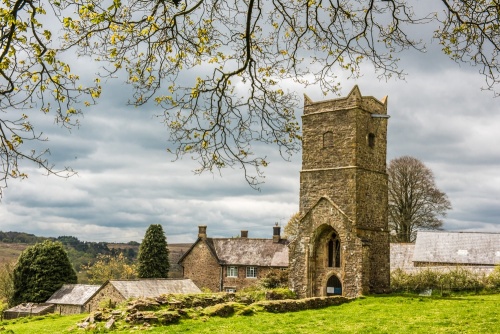 A landmark for visitors to Exmoor, Upton Tower is the only remaining part of a 14th-century church. The church fell out of use in the Victorian period when a new church was built by the main road through Upton village in 1867, and the body of the old building was eventually pulled down, leaving only the tower, sometimes called Upton Old Church.

The tower stands beside a cluster of farm buildings and overlooks Wimbleball Lake. The tower arch features lovely panelled tracery.

The only part of the body of the church remaining are short sections of the nave and chancel walls, reaching two feet high. Inside the tower are a painted Decalogue board and a painted inscription recording the addition of seating to the church in 1793.

A small 19th-century buttress supports the south-east angle of the tower, but it was built without any additional support. The church bells, cast between the 15th and 17th centuries, are no longer used and have been dispersed to other churches, including one as far away as New South Wales in Australia.

The tower is constructed of local rubble stone and rises in three stages, with a string course between each stage. At the top is a peculiar parapet with gabled corners. There are bell openings on all sides, but only the south side is unblocked. There is another panel, also illegible, on the inner wall of the blocked west window. 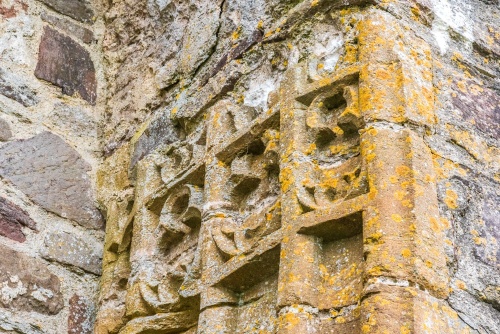 14th-century tracery on the tower arch

On the south front of the tower is a very worn tablet of Ham Hill stone, but the inscription is illegible.

The Old Church originally consisted of three cells on a very simple linear plan, with a square west tower leading to a rectangular nave and a smaller square chancel. Entry was by way of a south porch, and an old photo from the 1880s shows two doorways in the south wall.

The tower stands within a large graveyard that has been in use since at least medieval times. There are several fascinating old gravestones in the churchyard, though most have fallen and are gradually being covered over by turf.

The church tower is now cared for by the Churches Conservation Trust but unfortunately, there is no access to the interior. You can, however, look through a grill to at least get a glimpse under the tower arch. The tower stands at the end of a long country lane off the B3190 west of Upton village. The lane is very rough in places so please drive carefully. 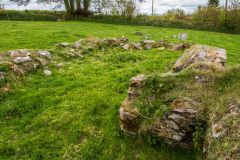 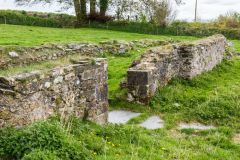 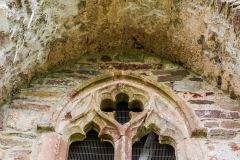 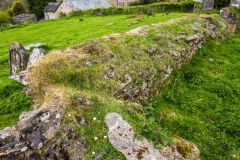