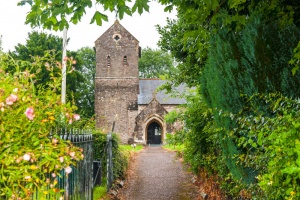 Morebath is a small village on the southern fringe of Exmoor. St George's church was begun in the 13th century, but much of the present building is a result of comprehensive rebuilding in the 15th century. Only the saddleback west tower survives from the 13th-century church, though the top stage appears to have been restored in the Victorian period.

St George's was restored by William Butterfield from 1874 (some would say it was over-restored, losing much of its medieval character in the process). Butterfield was one of the most popular mid-Victorian church architects. One thing Butterfield left untouched was the wagon roof over the north aisle, which retains its 15th-century ribs and carved bosses.

The interior of the church is plastered, with a 5 bay arcade including 1 bay on the chancel. All the church furnishings date from Butterfield's restoration save for a 20th-century reredos and altar. The chancel features Victorian tiles and a communion rail with iron quatrefoils.

,p>The drum pulpit is made of timber and decorated with carved panels again featuring quatrefoil designs.

The best feature is the marble font, another vestige of the Butterfield restoration. In the north aisle are several very good 18th and 19th-century wall monuments. One of the best is to the Bere family. Davy Bere died in 1774, just 6 weeks after his wife Ann. Their son John 'having borne with exemplary Patience the lingering Pains of Consumption', died before his parents, in 1766.

Another very good 18th-century memorial is to Nicholas Sayer, who died in 1713. The same memorial commemorates Sayer's grandson Sayer Bere, who died at just 1 year and 1 month old in 1737. A more modern memorial commemorates Captain Hamilton Henson of the East Surrey Regiment, who survived the Great War but died at Delhi in 1923 at the age of just 29 years.

One invaluable resource for the history of Morebath and its church is a collection of hand-written notes by Christopher Trychay, who served as vicar of St George's for 54 years, from 1520-1574.

Trychay's notes provide a fascinating insight into how one village coped with the religious upheaval of the Reformation. The notes have been transcribed into book form as 'The Voices of Morebath: Reformation and Rebellion in an English Village' by Eamon Duffy, 2001.

St George's is a lovely rural church and a good example of Victorian Gothic taste. It is perhaps not Butterfield's best work, but if you enjoy Victorian style it is an enjoyable place to visit. 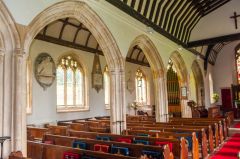 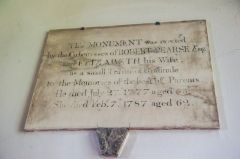 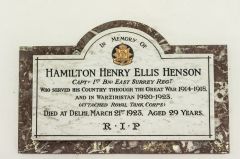