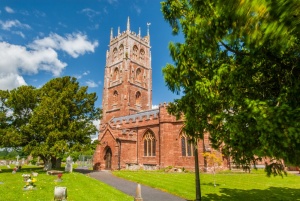 The church of St Mary the Virgin in Bishops Lydeard is one of the finest historic churches in Somerset, a county blessed with plenty of competition for that title! The church is first documented in 1239, but it seems very likely that there was a place of worship here much earlier.

St Mary's presents a quite lovely picture with its tall rose-coloured 14th-century Perpendicular tower. The tower rises in four stages to battlements and pinnacles built of red sandstone from the Quantock Hills. As satisfying as the exterior of St Mary's is, it is the interior that makes a visit to Bishops Lydeard so worthwhile.

The nave is composed of four bays in Perpendicular style. The nave rises to a panelled wagon roof, which leads to the chancel arch and the treasure that lies beneath it. 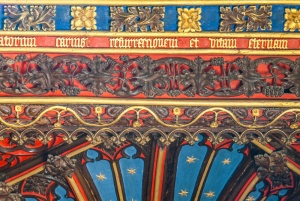 The medieval rood screen is quite superb, with beautifully carved panels and colourful painted sections. It dates to the 16th century, though the carved figure panels were added by Sir Ninian Comper in 1948. At the top of the screen is Latin script, spelling out the Apostle's Creed.

The neighbouring Jacobean pulpit is carved and painted to a high standard, and the painted bench ends compliment the screen beautifully.

The subject matter of the pew carvings is quite diverse; they include a pelican, other birds, trees, a coat of arms, foliage, a windmill, and a sailing ship. interestingly, not only are the bench ends carved, but the backs of the benches themselves. The font is also Perpendicular, with carved rosettes about the octagonal bowl.

There are several interesting memorials, including a brass to Nicholas Grobham dated to 1585, which depicts, among other things, a boy blowing bubbles. Taken as a whole, the interior furnishings of Bishops Lydeard are quite stunning.

At the back of the church is the royal charter of Edward I. Pause in the churchyard to examine the 14th-century cross, with the twelve apostles carved around the base. There is a second cross, believed to be a medieval village cross, that was moved to the churchyard in Victorian times. 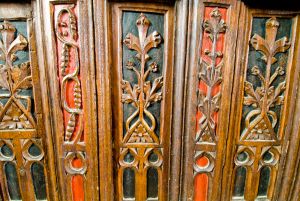 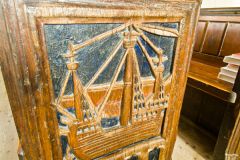 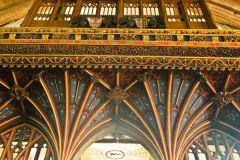 Self Catering near Bishops Lydeard