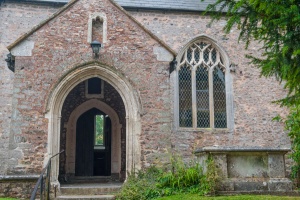 John Betjeman's 'Best British Churches' calls St Mary's 'a good Perpendicular church'. I'd go a lot further; it is fascinating. The most immediately obvious external feature is a 15th-century tower decorated with a chequerboard pattern of white Bere stone alternating with red sandstone. This is the only example of a chequerboard tower in Devon. In the angles of the tower are four figures representing the Beasts of the Apocalypse.

But it is within the church that you'll see why I rate it so highly; the late medieval screen separating chancel and nave is a work of art. It extends 10 bays of varying span across the entire width of the church, with doorway openings into the sanctuary and south aisle.

The fan vaulting and cornice, retaining much of its original red and gold paint, is work of the highest order. The top of the cornice is carved with bands of grapes and vines, while the uprights depict leaves.

It is possible that this screen was used as a model for a large number of similar screens across mid-Devon and Somerset. Architect Frederick Bligh Bond called it a work 'of singular beauty'. It is that. 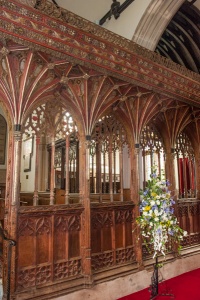 Who made it? Probably a team of carvers from Tavistock Abbey. On the screen, you can see the coat of arms of John Whytyng (d. 1530). Whytying's table tomb stands in the south aisle, which is separated from the nave by a carved and painted parclose screen.

It originally featured a memorial brass to Whytyng and his wife Anne set into the top, but this is now missing. They were apparently stolen in 1857 by a gang who entertained the sexton at the nearby Wyndham Arms pub before absconding with the brasses in a bag and taking them to America. Carved heads thought to represent the Whytyngs form drip-stones for the exterior of a window on the north wall, near the pulpit.

Whytyng (or if you prefer the modern spelling, Whiting) was a London merchant, a member of the Merchant Adventurer's Company. The chapel was intended as a chantry for the Whytyng family, and features a wonderful set of oak panels against the wall, brought here from Bradfield Hall, an Elizabethan mansion. The panelling is decorated with Biblical texts and heraldic coats of arms to the Walrond family of Bradfield. 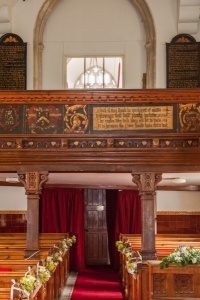 At the opposite end of the church, like a bookend to the screen, is a very nicely crafted Carolean gallery, dated to 1632, so almost exactly 100 years after the screen. It is fascinating to compare the 2 and see how styles changed in the course of a century. The gallery was erected by Anstice Wescombe, and the front of the gallery is carved with a long verse commemorating her gift.

The gallery bears arms of the Wyndham and Walrond families, as well as Biblical figures. In the south aisle is another memory of Anstice Wescombe; a mural tablet records gifts to the parish poor made by Anstice and her husband Robert. The inscription is flanked by small busts in beautifully depicted 17th-century costume.

One unusual feature can be found on a column in the south arcade, where a capital is carved with symbols of a ship and woolpack on the heraldic shield of the Merchant Adventurer's Company. This is probably a reference to how John Whytyng built the fortune that enabled him to pay for the aisle and (probably) the screen. Other capitals show arms of the Whytyng, Waldron, and Pauncefoot families. 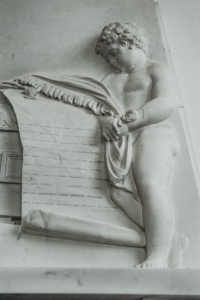 On the north side of the Whytyng Chapel is the tomb of Mary Wotton, great-aunt to Lady Jane Grey, the unfortunate Nine Day's Queen. A memorial brass to Wotton is set on the east chapel wall.

On the north wall of the chancel is a striking marble monument to a former rector, Rev. George William Scott, cousin of novelist Sir Walter Scott. The tablet bears a sentimental verse penned by Sir Walter in memory of his cousin, who died in 1830 of scarlet fever, having only been rector of Kentisbeare for 2 years. Though the verse is a perfect example of early Victorian sentimentality, it is hard not to feel a lump in your throat at some of Scott's verse

To youth, to age alike, this tablet pale,
Tells the brief moral of its tragic tale
Art though a parent? Reverence this bier,
The parent's fondest hopes lie buried here.

The pulpit dates to 1736 and is a lovely example of 18th-century inlay work. A carved angel that once decorated the sounding board now stands on the chancel screen. The relatively plain font is carved with quatrefoils and heraldic shields and probably dates to the 16th century.

One last note; by the door is a brass plaque to Francis Radford, a London builder who erected much the Holland Park area of London. 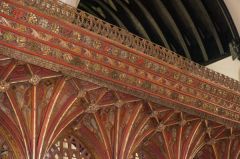 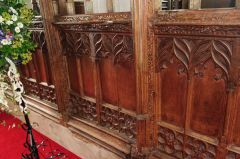 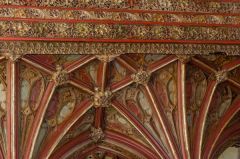 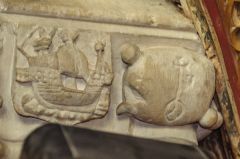 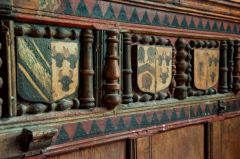 More self catering near Kentisbeare

More bed and breakfasts near Kentisbeare