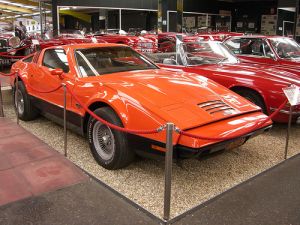 Haynes Motor Museum
The Haynes Motor Museum offers the largest collection of historic cars in Britain, featuring over 340 international vehicles dating back to 1886. There are eleven large halls of automobiles, with vehicles as diverse as a 1900 Clement, 1931 Duesenberg, and classic British motorcycles.

If the name Haynes sounds familiar, it ought to! The museum was established in 1985 by the Haynes Publishing Group, who publish the popular Haynes series of automotive manuals.

There are over 400 historic vehicles on show. The oldest vehicles are grouped together in one hall called the 'Dawn of Motoring', displaying only automobiles built prior to 1910. See a 910 Renault Twin Cylinder AX, and a 1898 Daimler Wagonette, dubbed 'Fiery Liz'.

A pair of halls display only British and American classic cars, including a 1965 Jaguar E-Type and a 1959 Cadillac Sedan de Ville. The prize exhibit in the classic car section is a 1931 Duesenberg Tourster, one of just 8 ever made.

One hall focusses on speedway motorcycles, while another covers British-built motorcycles, predominantly Norton and BSA. There is a hall of more modern cars, built after 1980.

See supercars like the Jaguar XJ220, luxurious Rolls Royce and Bentley models, and a special Motorsport hall devoted to a wide range of track and road racers. A special exhibition hall hosts changing exhibits on a different theme. Recent exhibitions include a history of Ferrari and 100 Years of Advertising the Motor Car.

In addition to the large display halls, there is an outdoor collection of military vehicles.

One unexpected pleasure is penny arcade automotive games from the 1950s and 60s plus more modern video games on a motoring theme.