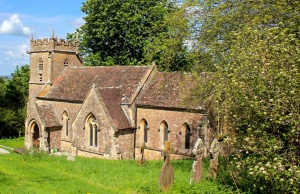 The earliest record of a church at Maperton comes from around the year AD 940. Nothing remains of that Saxon building, or of the Norman church which replaced it, save for the font, which may date to the 12th century. The first recorded rector was a man named simply as 'Martin' who served in the early 13th century.

In the mid-18th century, Maperton gained a reputation as a centre for clandestine marriages - something of a Somerset version of Gretna Green. The rector, one Charles Mitchell (1715-1766) was known for conducting marriage ceremonies for people from well outside Maperton parish; 24 of these in 1749 alone. 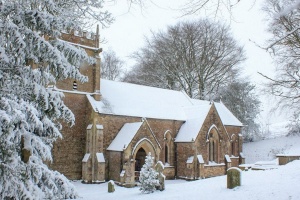 The church in winter

In 1849 a devastating fire damaged the church and completely destroyed the roof. It was thatched over in 1850 and re-roofed the following year in slate and tile, but these repairs were simply postponing the inevitable.

By 1869 the church was dilapidated and was pulled down, apart from the 15th century west tower, which was salvaged and incorporated into a new building. This new church was designed by Henry Hall, but his efforts were not universally appreciated.

The Victoria County History reports that the heating didn't work, the sanctuary was too small, and no one liked the new furnishings. Perhaps the parishioners felt better about the church in 1921, when a royal coat of arms to George II was found in a local stable loft and restored to the church.

The arms were presented in 1738, presumably to commemorate the death of Queen Caroline the previous year. Also in 1921 the Norman font, which had been removed to the churchyard in the Victorian rebuilding, was brought back inside the church. The Victorian font was given to the church in Ringwood, Hampshire.

The pride of St Peter and St Paul's is the east window, with glass by Henry Holiday, who also designed 4 other windows for the church. The church guide calls Holiday's work one of the best windows in Somerset.

A final mention must be made of some fragments of carving built into the south porch wall. These fragments may possibly be of Saxon origin, a reminder that though much of Maperton church is Victorian, it stands on a site used for worship for over 1000 years.

Note: Do not confuse this church in Maperton, Somerset, with All Saints Church in Mapperton, Dorset. 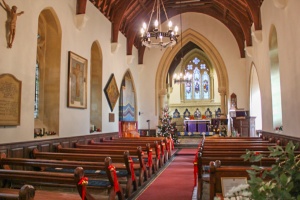 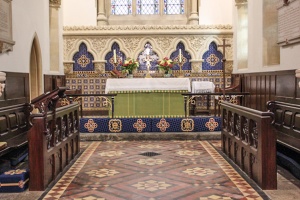 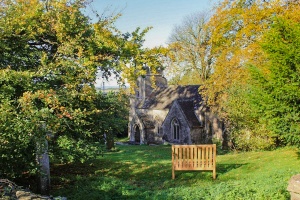 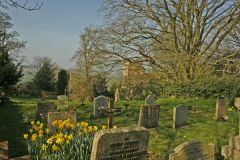 More self catering near Maperton

More bed and breakfasts near Maperton