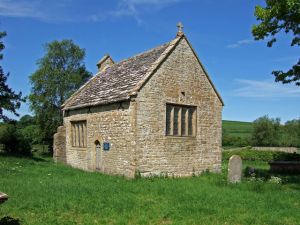 Oborne, St Cuthbert's Church
The 16th-century chancel is all that remains of Oborne's church. The church was built in 1533, which probably makes it one of the very last churches to be constructed before the Reformation.

The site has been in use since the 10th century when monks from Sherborne Abbey built the first Oborne church. The abbey was given Oborne by King Edgar in memory of the elder brothers of King Alfred the Great, both of whom were buried at Sherborne. The first church was erected around AD 970 as a chapel of ease to Sherborne Abbey rather than a parish church in its own right. The monks served Oborne until the Abbey was suppressed by Henry VIII in 1539.

By the 19th century, the church had fallen into a very poor state, and a new church was built nearby. The Old Church was pulled down, except for the chancel. This was restored in 1930 after it was found being used as a barn, and is now preserved by the Churches Conservation Trust. Stones from 'Old St Cuthberts' were used to build the new church, also dedicated to St Cuthbert.

The chancel features a 16th-century barrel-vaulted roof and a carved Jacobean pulpit, as well as 17th-century communion rails. There is a 15th-century font brought here from North Wooton church.

The chancel was built by Abbot Meyer of Sherborne Abbey, and John Dunster, the sacrist. An old tradition says that John Dunster served as the first rector of Oborne and is buried at the chapel entrance. This suggests that Dunster's tomb is the one you see just right of the entrance, made of a flat stone carved with the symbol of a cross atop three steps. This stone was discovered buried beneath the nave floor.

In the gable end of the chapel are a pair of reset 15th-century window heads discovered in the rectory garden. In the bell turret hangs a 15th-century bell. On the north wall is a window carved with a Latin phrase that translates as 'Pray for the good estate of Master John Dunster, Sacrist of Sherborne, who caused this work to be made'.

On either side of the inscription are heraldic shields, one carved with the initials ID, presumably for John Dunster. A similar window at the east end is inscribed to Abbot Meyer and bears the arms of Sherborne Abbey. Over the window is a Tudor coat of arms and a crown.

The interior of the chapel boasts medieval tiles found during restoration work. The pulpit is of oak and dates to 1639. The altar rails are also 17th century, as is the communion table. The table was found in the local schoolroom. It stands atop a stone slab that appears to be the original altar. Look for stone fragments of the original font, which were found in the rectory garden.

St Cuthbert's is one of the smallest churches in England, measuring just 21 feet long and 12 feet wide. The church is normally open to visitors.