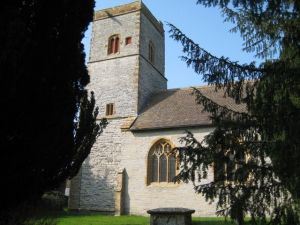 Northover, St Andrew's Church
There was a church in Northover as early as the late Saxon period, and Northover is mentioned in the Domesday Book of 1086. The church stands on a mound which may hide a pre-Christian temple.

The current church is mostly 14th and 15th century, though some fragments of stonework from an earlier church are to be found in the lower section of the tower. The church stands beside the River Yeo and the Roman Fosse Way, and there is a large Roman cemetery nearby. It has been suggested that the church was built atop a Roman temple, and there was almost certainly a Saxon minster church on this spot, held by Glastonbury Abbey.

The church was recorded as being held by Maurice, Bishop of London at the time of the Domesday Book, but later passed to St John's Hospital in Bridgwater.

The church consists of a nave, chancel, two short transepts, and a west tower. The tower is plainly decorated, with diagonal buttresses at the base. There are four bells; the oldest dates to 1450-1480 and was cast in Bristol.

The nave and chancel were rebuilt in the early 19th century and comprehensively restored in 1878 under the architect Charles Benson. The main interior interest is a 17th-century pulpit.

St Andrews is no longer used regularly for worship and is cared for by the Churches Conservation Trust and there is a keyholder nearby.