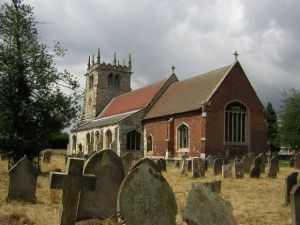 The name of Bardney village gives a clue to its past. The 'ey' ending means 'island', an indication that the area on the bank of the River Witham was once marshland, and the village site little more than an island in the marsh. Bardney was the site of a 7th-century abbey established under King Ethelred (not the 'unready' king of the same name).

When the bones of St Oswald were brought to Bardney Abbey in AD 675, the monks at first refused to admit them. They were later convinced that he was indeed a saint, and ever after they left the gates of the abbey wide open.

This custom gave rise to a Lincolnshire saying - when someone leaves a door open, they are asked, "Are you from Bardney?".

The abbey was destroyed by Vikings in AD 870 and lay in ruins until 1087 when the Norman lord Gilbert of Ghent founded a new priory beside the original site. The new Bardney Priory was modelled after York Minster and was raised to full abbey status by Gilbert's son Walter in 1116.

When Henry VIII tried to dissolve Bardney Abbey in 1536 the monks rose in revolt. Six monks were captured and hanged, drawn, and quartered in Lincoln in 1537, and the rebellion faded away. After the Dissolution, the abbey land was granted to Sir Robert Tyrwhitt, who built a mansion on the site. Today only the outlines of the abbey buildings and the later mansion remain.

The parish church of St Lawrence dates to 1434 and was erected by the monks of Bardney for the villagers. Another historic site is Bardney Almshouses, built in 1712 by Peter Hancock and known locally as Hancock's Hospital. Hancock originally built 7 linked cottages under one roof to provide housing to the poor of the village, but the 7 cottages were later converted to 4 dwellings.

Bardney Manor has a history going back to at least the time of the Domesday Book in 1086 when there were 16 villagers and a mill.

The history of Bardney is explored in the modern Heritage Centre, where you can learn about the industrial heritage of the area, including the river locks, local farming, railways, the Morrells canning factory, and the beet factory operated by British Sugar.

Listed buildings in Bardney include the almshouses, schoolhouse, Manor House, and Abbey Lodge, but the only Grade I listed building is St Lawrence church. 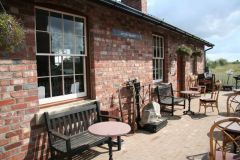 More self catering near Bardney >>

More bed and breakfasts near Bardney >>