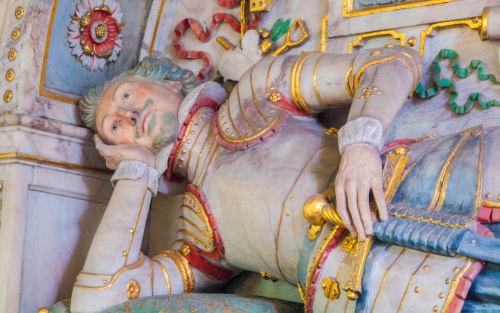 Snarford church is a hidden gem, a redundant church tucked away on a quiet lane, far from the usual tourist track. There's not even a village, just a few scattered houses and farms. Yet in this out of the way spot lies a delight; a small church blessed with not one, not two, but three superb Elizabethan and Jacobean monuments.

The village of Snarford was mentioned in the Domesday Book of 1086 when it had a population of 16 families. The name probably comes from Snardesforde, meaning 'Snortr's ford'. Snortr was likely one of the Vikings who settled in this area of Lincolnshire during the 9th century.

The village grew in size during medieval times, but by the beginning of the Tudor period, there was little left. But in 1606 Sir George St Paul began the building of Snarford Hall, now vanished. The St Paul family (also spelled St Poll, Sampoole, or Saintpaules) left an indelible mark on this small church, however, in the form of the funerary monuments located in the chancel.

The St Pauls came from Yorkshire. Their association with Snarford began around 1400, when Elizabeth Snarford married John St Paul, bringing the manor of Snarford into the St Paul possessions.

Following the Dissolution of the Monasteries under Henry VIII the St Pauls acquired large amounts of land in Lincolnshire. George St Paul rose to prominence as a legal advisor to the Duke of Suffolk, Henry VIII's agent in Lincolnshire. It is Sir George's son, Sir Thomas St Paul, who is remembered in the largest and grandest of the tombs in the chancel. 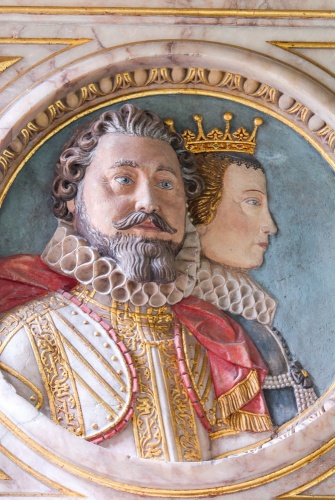 This tomb is in the form of a six poster bed to Sir Thomas and his family. Sir Thomas (d 1582) was an MP and twice served as Sheriff of Lincolnshire. He was married to Faith Grantham, who had connections to many of the most powerful families in the county, and their tomb is covered with reminders of the St Paul family's connections.

Sir Thomas is depicted in armour, with his feet resting on a cushion and his head on a helmet bearing the St Paul crest of an elephant and castle. Lady Faith is dressed in a kirtle with a hooded headdress. Above the couple are depictions of their 8 children, four of whom died in infancy. At the very pinnacle of the canopy is a likeness of Sir Thomas' heir, George St Paul, the builder of Snarford Hall.

The alabaster tomb of that same George, later Sir George St Paul (d. 1613) stands against the north wall of the chancel. George was the most successful of the St Paul clan; he served as Sheriff of Lincolnshire, magistrate, and MP. He was knighted by James I in 1607.

His effigy is clad in armour and breeches and lies propped up on an elbow above the effigy of his wife Frances (nee Wray). Frances St Paul is dressed in a dark gown and the wide ruffed collar so common in the early Jacobean period. At the base of the tomb, in a separate recess, is an effigy of the couple's only child, Mattathia.

Sir George was only 53 when he died in 1613, and he left his wife Frances an income of 1700 pounds per year, which made her a very wealthy heiress. Frances later married Robert Rich, Earl of Warwick, and it is these two who are depicted in the third monument in the chancel.

This final, and smallest of the St Paul monuments is perhaps the finest from an architectural viewpoint. It shows the head and shoulders of Frances and Robert in an oval frame, like the painted miniatures so popular at that time. Frances married Robert Rich in 1616, becoming Countess of Warwick when he purchased the Earldom in the following year.

Robert Rich was an unsympathetic character. He ill-treated his first wife and divorced her in 1605. He married Frances in 1616, as we have mentioned, but this marriage too, perhaps not surprisingly, went poorly. Rich died in 1619 and was buried in Felstead, Essex. Frances lived on to the age of 66, and when she died in 1634 she chose to be buried here, in Snarford, with her first husband.

The church itself was begun in the 12th century, but most of what remains is 14th century, with the exception of some early Norman stonework in the tower. At one time the church possessed a lovely wrought-iron railing, but this has been removed to the medieval section of the Victoria and Albert Museum in London.

The font is a lovely 15th-century octagonal design, with carvings depicting 'The Instruments of the Passion', symbols associated with the crucifixion of Christ. About the base of the bowl are heads of humans and demons.

The church of St Lawrence is cared for by The Churches Conservation Trust and is generally open at any time. There is very limited parking along the verge of the road.

St Lawrence, Snarford is well worth a visit. The St Paul tombs are truly magnificent, and their setting in this lonely church creates an unforgettable impression. 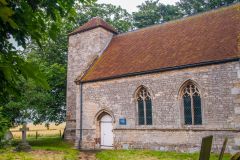 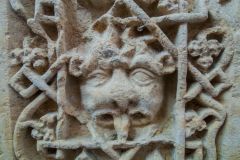 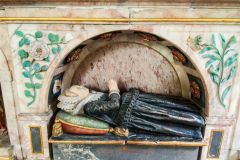 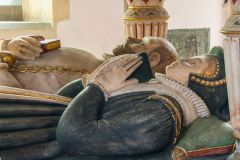