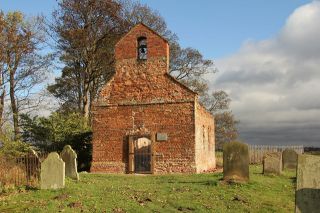 Goltho, St George's Church
An unpretentious little country church built entirely of red brick. The building consists of a chancel and nave, entered directly through the west wall, underneath a fanciful brick-built bellcote.

The church is all that remains of a deserted medieval village. Medieval Goltho had a motte and tower within ringwork defences, but these exist today as mere bumps and mounds covered with turf. The site of the castle is just to the south-west of the churchyard.

The nave of the church was built by the Grantham family when they bought Goltho Hall, now vanished, around 1530. The chancel was added sometime around 1600.

The interior is an attractively painted mix of white and pale blue, decorated in Georgian style, with a double-decker pulpit. The reredos is quite splendid, and other Georgian features include box pews, carved altar rails, and carved bench ends. St George's is no longer used for regular worship and is in the care of the Churches Conservation Trust.

NOTE: Unfortunately, the church was destroyed by fire in 2013. Only the brick shell remains.