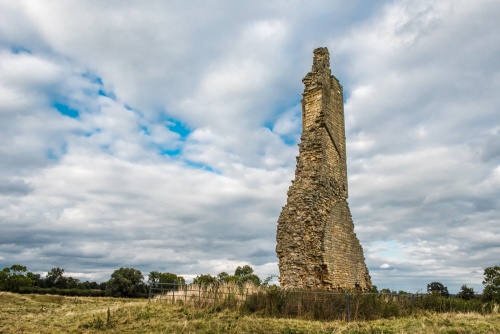 After William the Conqueror's success at the Battle of Hastings in 1066 he divided up his new kingdom amongst his Norman supporters. One of his grants of land was an estate at Kirkstead, near the present town of Woodhall Spa in Lincolnshire, which he gave to Eudo, one of the knights who had fought with him at Hastings.

In 1139 Eudo's son, Hugh Brito (Hugh the Breton), Lord of Tattershall, visited the Cistercian abbey of Fountains in Yorkshire where he admired the simple life of religion and work practised by the monks. He decided to establish his own monastery at Kirkstead, near the River Witham. Kirkstead Abbey was a daughter house of Fountains Abbey and was populated by twelve monks under an abbot.

The first location proved to be unsuitable because of the marshy ground, so sometime before 1187 Hugh's son Robert granted more land a short distance away. The monks complained that the new site was still too wet and unhealthy, but it was an improvement on the first location. 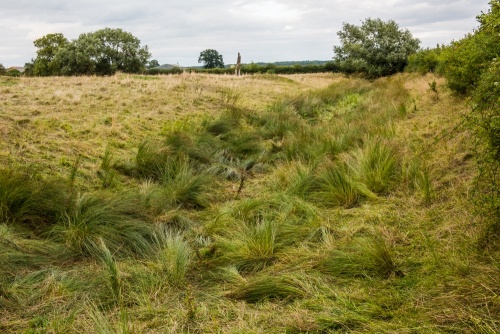 Remains of the monastic moat

Kirkstead Abbey grew in size and wealth during the 12th and 13th centuries, becoming one of the largest and most important monasteries in Lincolnshire, but it suffered a reversal of fortune after the Black Death of 1348-50. The Brito family continued to act as patrons throughout the medieval period.

The Abbey was suppressed by Henry VIII in 1537 and its estates seized by the Crown. Henry VIII's commissioners accused Richard Harrison, the last abbot of Kirkstead, and three of his monks of being involved in the 1536 Lincolnshire Rising, an attempt to overthrow the Dissolution of the Monasteries. The charges were probably false, but the abbot and monks were executed for treason. Harrison became a Catholic martyr for his role in the tragedy.

The Abbey site was sold to Charles Brandon, the Duke of Suffolk, Henry VIII's brother-in-law. When Brandon died it passed to the Clinton family, Earls of Lincoln, and briefly to the Bishop of Lincoln. The Clintons built a country residence on the site, incorporating parts of the monastic buildings. The residence was abandoned sometime before 1791, leaving the structure to decay. Local residents used stone from the site for other building projects. 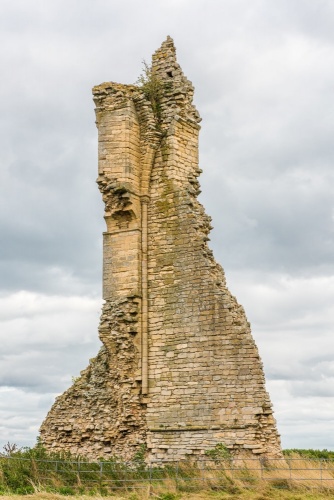 A closer look at the abbey ruins

Pieces of carved stone from Kirkstead abbey can be seen built into many buildings in the surrounding area. The base of the Abbey's font is at Langton church. In 1830 a pair of men laboured for six months breaking up stones from the monastic buildings to burn for lime.

Only one part of the medieval Abbey remains intact; a part of the south wall of the abbey church's crossing tower stands upright like a slender finger pointing at the sky, and cattle graze in the fields where the monastery once stood.

You can see round-headed arches for the clerestory and triforium, and the remains of pilaster buttresses on the east side. You can see a solitary vaulting corbel on the south side that once supported the sacristy vault.

A moulded string course supports a circular wall shaft that rises to a floriated capital supporting a single vaulting rib. You can still make out the foundation walls of the monastic buildings, though the walls are now covered by turf.

Unfortunately, the abbey ruins are fenced off and so you can only view them from the footpath that leads through the site to St Leonard's Chapel.

Perhaps just as impressive as the remaining stonework is the moat the surrounds the site. Though time and erosion have softened the profile of the moat you can still see it very clearly. It is worth walking past the abbey to the chapel, where you can see a group of carved stones rescued from the abbey site. The stones lie in a circular arrangement in the churchyard to the north-east of the chapel. 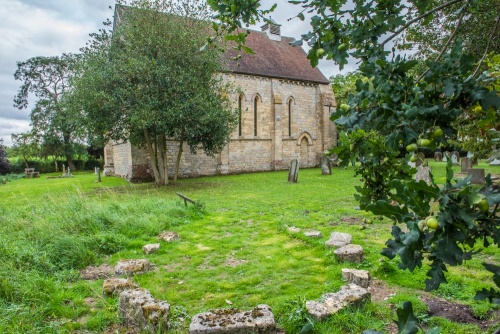 Carved stones from the abbey outside St Leonard's Chapel

Turn left onto Abbey Lane directly beside the pub and follow it to the abrupt right-hand bend. Just where the road bends there is a wide parking area on your left where you will find an information panel and map detailing the Abbey site. Just follow the obvious farm track towards the upright ruins you can see in the farm field ahead. The track can be muddy in wet weather so good footwear is advisable.

More self catering near Kirkstead Abbey