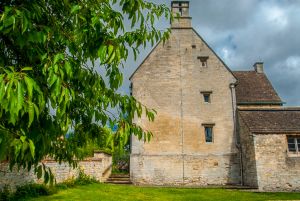 Woolsthorpe
Sometimes called Woolsthorpe by Colsterworth, this attractive village in southwestern Lincolnshire is home to Woolsthorpe Manor, the birthplace of Sir Isaac Newton. It was in the orchard beside the manor house that Newton is thought to have had his revelation about the law of gravity. Woolsthorpe Manor is well worth a visit, but spare time for a wander through the pretty village.

The area was settled by the Romans beside Ermine Street, the major road linking London and Lincoln. Another Roman road called High Dyke runs nearby. The village is almost a suburb of nearby Colsterworth, whose name betrays its past as an enclosure for charcoal burners, but at the time of the Domesday Book, both villages had a separate entry.

The name Woolsthorpe comes from a combination of Old English and Scandinavian words meaning 'hamlet belonging to Wulfstan'. At the time of the Domesday Book, the village was held by the Archbishop of York.

Perhaps the oldest building in Woolsthorpe is Chapel House, at 22 Newton Way, which began as a 13th century chapel of ease to the local manor. Villagers who could not get to the church in Colsterworth could worship at the chapel.

The chapel also served as a place for travellers to rest overnight. It was converted into a private dwelling around 1800, which entailed clearing the surrounding burial ground of bones. Cartloads of bones had to be removed to create the current garden and roadway.

The River Witham runs between the two villages, with a low limestone ridge on either side.

When the Great York Road turnpike (later the Great North Road) was opened in 1752 Colsterworth became a major coaching stop, and boasted as many as 10 inns. The village hall is named in honour of Newton and was paid for by public subscription to honour the village's favourite son. There is no church in Wollsthorpe, so Newton was baptised in St John the Baptist church in Colsterworth.

The church dates to the Saxon period, though much of the early architecture was swept away in a Victorian restoration. One item was preserved, however; a stone sundial plate, which still bears the marks made by Isaac Newton at the age of nine. The young Newton cut the stone with his penknife, and it is now mounted on the wall under a wooden effigy to the great scientist.

There are very few amenities in Woolsthorpe itself; most are clustered in Colsterworth.

There is a second Woolsthorpe village in Lincolnshire, about 5 miles to the north-west, sometimes known as Woolsthorpe by Belvoir.

More self catering near Woolsthorpe >>

More bed and breakfasts near Woolsthorpe >>