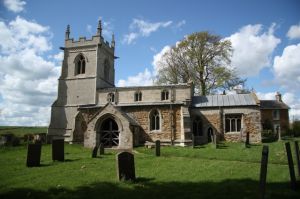 Garthorpe, St Mary's Church
A very nice 12th-century church built of local ironstone. St Mary's retains its Norman north arcade but much of the rest of the church is 14th century, with the addition of a 15th-century tower in Perpendicular style.

The church originally consisted of only an aisless nave, but a south aisle was added in the late 12th century. A north aisle followed around the year 1200, at which time the nave and south aisles were extended. The chancel was not built until around 1240.

The next major alteration was in the 15th century when a clerestory was added to the nave and the west tower was built of Lincolnshire limestone.

The best features of the interior are a medieval Easter Sepulchre and aumbry. There are 13th-century piscinas at the east end of both aisles. The interior was stripped of plaster during a Victorian restoration, with the result that it has a very pleasant warm glow, due to the colour of the local stone.

NB. Don't confuse this Garthorpe with the village of the same name in Lincolnshire.