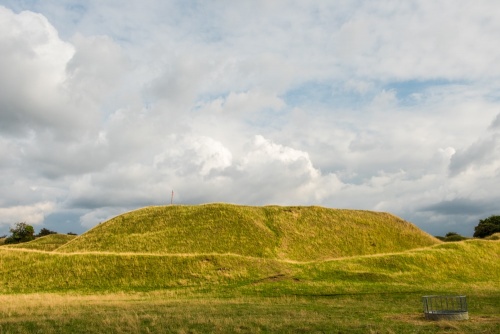 Bytham Castle is an 11th-century motte and bailey fortification on a spur of land above the River Tham. The castle gives its name to the village of Castle Bytham.

The castle is thought to have been built by Drogo de Bruay, William the Conqueror's brother-in-law, shortly after the Norman Conquest. An alternative explanation is that it was built by Duke William's half-brother Odo, Bishop of Bayeux.

The first documentary record of the castle comes a century later when it was in the hands of Wiliam, the 3rd Earl of Albermarle. From him, it passed to William de Colvile, and from 1215 to William de Fortebus.

Fortibus rebelled against King Henry III, who besieged Bytham Castle in the winter of 1220-21 and forced the garrison to surrender. Henry ordered the castle to be destroyed so that it could not be held against him. The king returned the castle to the Colvile family, who restored it and lived there until the late 14th century. It was then occupied by Lady Alicia Basset, 'Lady of Bytham'. Lady Alicia was said to be the wealthiest woman in Britain and was the grandmother of Henry V. 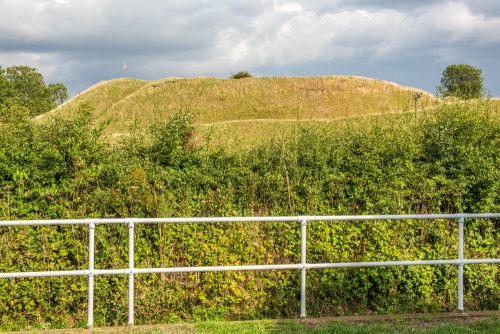 A later resident of Bytham Castle was Sir Thomas Malory, the author of the 'Morte d'Arthur', which really launched the legend of King Arthur and Camelot as we know it today. John of Gaunt, 1st Duke of Lancaster, sent his children to Bytham Castle to be raised after his wife Blanche of Castile died of the plage at Bolingbroke Castle.

By the middle of the 15th century, the castle was in a poor state of repair and by 1544 it was reported as ruinous. Stone was robbed for local buildings and by the early 20th century there was no visible stonework above ground.

The castle occupies a natural spur of land running east to west into the valley of the River Tham. The castle motte is on the tip of the spur while the L-shaped bailey encloses an area to the south and east of the motte.

The motte stands about 18m high and is topped by the ruins of a quadrangular shell keep, with earth-covered walls defining rectangular ranges of rooms around an inner courtyard. A donjon, or tower, stood in the south range. The motte is surrounded by a deep ditch with a high external bank. A causeway across the bank leads to a second motte about 10m diameter where a tower stood, defending the passage across the inner barbican to the keep. 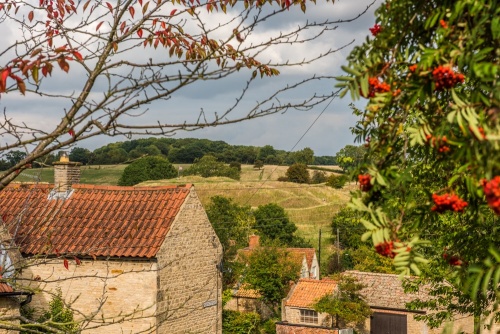 The castle over the village rooftops

The earthworks are impressive, but what really makes Bytham Castle so interesting is the elaborate system of waterworks linked to the castle. The system of channels, drains, ponds and sluices were created on the original course of the River Tham and combined the need for defence with practical concerns such as milling and and raising fish.

To the north and west of the motte and bailey is a depression known as Castle Yard, created by channeling the river across the valley floor. South of the castle are the remains of a fishpond divided into two tanks by a central island. These former water features are now dry, as are several secondary, small pools.

The present river channel was built in the medieval period as a leat to carry water away from the castle when the water level rose to high.

Southwest of the castle is a bank that the only remaining feature of a medieval wall built to defend the settlement that grew up beside the castle.

Unfortunately, Bytham Castle is on private land and is not usually open to the public. That said, you can get a very good look at the castle earthworks and motte from Glen Road and from a footpath that runs across the northern edge of the castle site. To reach this footpath take Castlegate past the village duck pond and then turn right up a small lane almost opposite the entrance to Water Lane.

This takes you immediately to a stile over a fence. You can see the castle directly ahead of you across the field, but this is private land so please stick to the footpath which strikes off to your left following the northern field boundary.

An information panel lists all the famous people to live at Bytham Castle over the years. It reads like a who's who of medieval Britain. A sign beside the footpath to the castle emphasises these links with the words:

More self catering near Bytham Castle