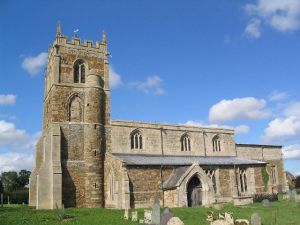 Edmondthorpe, St Michael's Church
St Michael and All Angels is primarily a 13th-century church with rebuilding in the 14th and 15th centuries. The church stands near the ruins of Edmondthorpe Hall and consists of a clerestoried nave with aisles, chancel, pinnacled west tower, and both north and south aisles.

The lower sections of the tower are original 13th-century work, while the top is 15th century. A tubular column on the exterior of the tower shows the location of a spiral stair rising to the bell chamber. The core of the building is in Decorated style, and there is a very nicely carved medieval rood screen, as well as a royal coat of arms to George III.

The major historic interest is the series of memorials to members of the Smith family. The most impressive of these is an alabaster monument to Sir Roger Smith, who died in 1655 and was responsible for building the nearby Hall. Sir Roger is tiered with effigies of his two wives, one of whom was Lady Ann Smith.

Lady Ann gained a local reputation as a witch and was said to be able to change herself into a cat. A reddish discolouration on her effigy is traditionally said to show where a butler struck her with a small axe while she was in cat form.