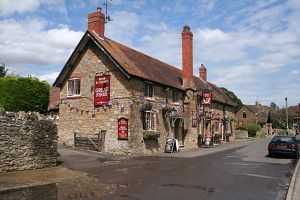 The Rose and Crown, Bradford Abbas

Bradford Abbas is a small village on the River Yeo, four miles from Sherborne. The name comes from a combination of words for the 'Abbot's broad ford'. The abbot concerned was the abbot of nearby Sherborne Abbey, and the ford crossed the Yeo just south-east of modern Yeovil.

We do not know when the first settlement grew up beside the ford, but there is a record of a 1st-century Roman camp nearby.

We know that farming took place near here in the 840s AD, during the reign of King Ethelwulf. In AD 933 King Athelstan gave land at Bradford to the Bishop of Sherborne, and the Abbey received rents for the manor of Bradford Abbas until the Dissolution of the Monasteries.

The glory of Bradford Abbas is its beautiful parish church of St Mary the Virgin. The church is primarily 15th century, with an embattled west tower, a 15th-century chancel screen, and a carved Jacobean pulpit. Look for the memorial set into the floor commemorating William Harvey, who died during Monmouth's Rebellion in 1685. Outside the church are the remains of a 15th-century preaching cross.

If you fancy a cold pint you can pop into the Rose and Crown, a picturesque inn in the centre of the village. The inn features an open fireplace from the Tudor era - look for the Tudor rose carved into the stonework. From a later period is the late 17th century Chantry House, a thatched dwelling on North Street. 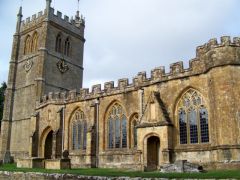 More self catering near Bradford Abbas >>