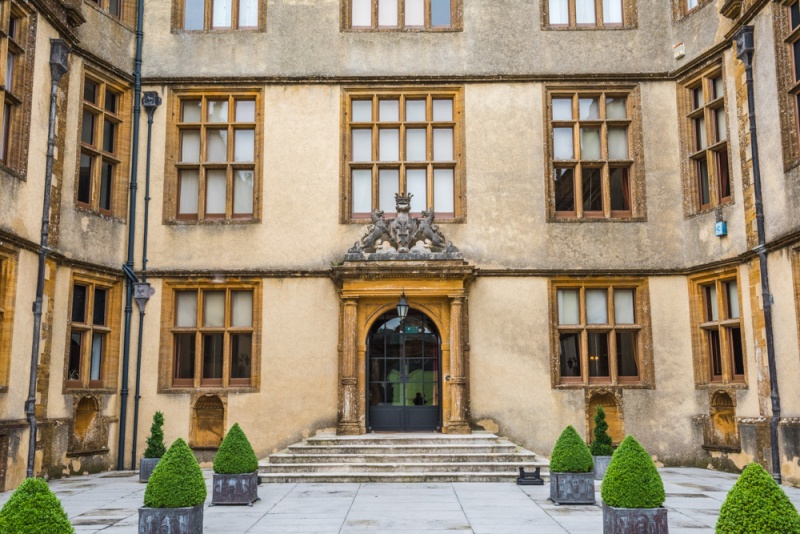 More stately home than fortified castle, Sherborne was built by Sir Walter Raleigh beginning in 1594. The story goes that Raleigh was journeying to Plymouth when he saw the Sherborne estate, which was then only a 12th-century hunting lodge in a deer park owned by the church. He admired Sherborne so much that Queen Elizabeth I "persuaded" the church to grant the estate to the crown on a 99-year lease, which she promptly made over to her favourite, Raleigh. 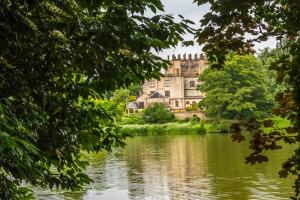 The castle from the lake

Raleigh built a new house around the core of the old hunting lodge (now the "old castle"). He called the four-story rectangular house Sherborne Lodge. Although Raleigh lived here for only a decade, one amusing tale of his time at Sherborne has survived. It seems that as Raleigh sat and looked out over his gardens to the Dorchester road, he lit his pipe. A servant, not familiar with this new habit of smoking, thought that his master was on fire and threw a glass of ale over him!

After Raleigh's execution in 1616 Sherborne was purchased by the Digby family, whose descendants have owned it ever since.

The Digbys wasted little time in putting their own stamp upon Sherborne. In the 1620s they added four wings to Raleigh's simple rectangle. Shortly after, Sherborne saw action in the Civil War, when Parliamentary troops reduced the "old castle" to rubble. It is only at this point that the name "Sherborne Castle" came to be used to describe the house that Raleigh and the Digbys had built.

The house has entertained royalty on more than one occasion; Prince William of Orange stayed here in 1688, and George III in 1789. By that time the house had been surrounded by 20 acres of landscaped gardens and a 50-acre lake designed by Capability Brown. On the verge of the lake are huge cedar trees dated to over 250 years old.

The interior of Sherborne Castle is replete with family portraits, fine art, furniture, and porcelain collected by the Digby family over their centuries of residence here. The ceilings show off excellent Jacobean plasterwork, but even more intriguing are the original kitchens built by Raleigh.

Sherborne Castle and the neighbouring 'Old Castle' are well signposted from major roads around Sherborne. The castle is an absolute delight to visit, mixing the ornate state rooms of the Digby family with the earlier Tudor chambers built by Sir Walter Raleigh. In one place an original Tudor window, which was originally set in an exterior wall, now looks out over an interior passage, for the wall has been completely encased in a later Digby addition.

Secret Stories
One feature which we really enjoyed is that each of the major rooms has a colourful information sheet revealing 'secret stories' of the people who lived at Sherborne over the centuries. These stories are fascinating and make the history of the castle and its inhabitants really come alive in a way that most stately homes do not.

I was captivated by the story of one Digby who fell in love with a young woman that his parents considered unsuitable. They sent him abroad to get over her, and while in Europe he was forced to pretend to be dead in order to escape from agents of the Medici. His young lady back home heard of his death and was cast into despair.

At the same time the young Digby, very much alive, heard false rumours that she was having an affair, and in a fit of rage threw a lock of her hair into the nearest river. In time Digby came home from Europe, and the first thing he did was visit his young lady in secret. They ironed out their misunderstandings and were secretly married. Their families, faced with a fait-accompli, gave in, and accepted the couple.

It is this sort of fascinating story that makes Sherborne Castle so much fun to visit. You really feel you get a sense of the people who lived, loved, and fought here over the centuries.

Do take the time to walk around Capability Brown's lake, which gives wonderful views back to the castle. One of the best places to view the castle is from Alexander Pope's Seat, a neo-classical folly named for the poet Alexander Pope, a family friend who advised the Digbys on how to lay out the garden and grounds. If the day is fine, the views of the castle reflected in the lake are simply stunning. 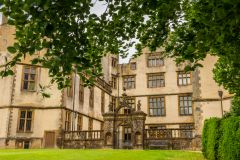 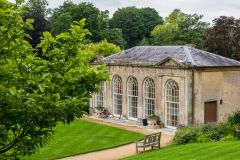 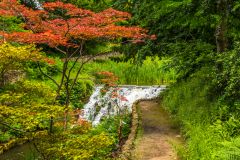 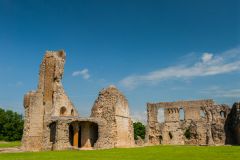 More self catering near Sherborne Castle

Self Catering near Sherborne