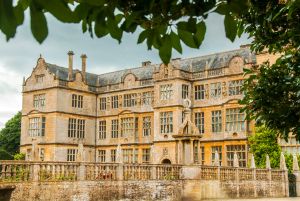 Montacute House is an E-shaped Elizabethan mansion built of warm-coloured Ham Hill stone. The interior is sparse furnished, but the long gallery (172 feet) houses over 100 portraits from the National Portrait Gallery. The Tudor exterior is one of the most impressive in England, and includes the west front, which was imported whole from another Tudor house in the 18th century.

The name 'Montacute' comes from the Latin for 'pointed hill'. The Normans built a motte and bailey castle here, and the estate was later granted to the French abbey of Cluny. In 1102 Cluniac monks established a priory at Montacute as a daughter house of their monastery at Cluny.

When Henry VIII dissolved the priory in 1539 most of the monastic buildings were destroyed. The land was sold, but nothing substantial was built here until 1601, when the Phelips family built the superb Elizabethan house we see today. They used local Ham Hill stone, as the quarry was only a few miles away. Ham Hill stone is golden-red, and almost glows in the sunlight, giving Montacute House a welcoming, warm appearance.

The most prominent of the early Phelips, or Phelps, owners was Sir Edward, who built Montacute after a successful career as a lawyer and MP. He served as Speaker of the House of Commons and oversaw the trial of Guy Fawkes and his fellow Gunpowder Plot conspirators. Montacute was Sir Edward Phelips' statement of his power and influence. 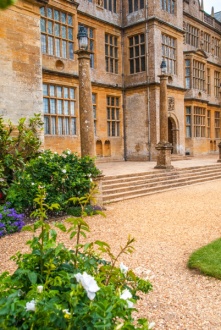 While Sir Edward was a favourite of James I. his son, Sir Robert Phelips, was not so fortunate. A strident Protestant, Sir Robert condemned King James' plan to marry his son Charles to a Catholic princess. For his opposition to the king's plans, Sir Robert spent 8 months in the Tower of London.

A later Sir Edward Phelips (1725-1797) remodelled the west front, installing most of an entire facade brought from another Elizabethan house at Clifton Maybank that was being demolished.

One of most notorious Phelips owners was Sir William (1823-1889), who was known as 'The Gambling Squire' for his addiction to gambling on practically anything. Sir William once bet on which of two flies would crawl down a windowpane fastest. He put his money on the wrong fly and lost the bet.

Sir William managed to gamble away most of his family fortune. He even had to sell the family silver to pay for his daughter Marjorie's 'season' in London. So it comes as no surprise that the Phelips family had to leave Montacute in 1911, and the house was leased to tenants. In 1915 Lord Curzon bought the property, but it was put up for sale in 1929. There were no takes, and 2 years later the property was valued for scrap at GBP 5,882!.

The house was faced with total destruction until Ernest Cook stepped in. Cook was the grandson of Thomas Cook, the successful travel entrepreneur. He prompted the Society for the Protection of Ancient Buildings to purchase Montacute and grant it to the National Trust. Cook made a habit of this sort of rescue act; he purchased a total of 17 historic estates, including other National Trust properties at Buscot and Coleshill. 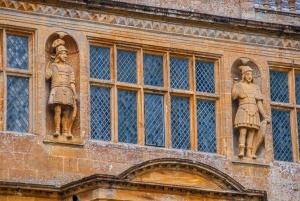 Carved figures over the entrance

This room is dominated by a large four-poster bed made around 1612. Among the portraits hung on the walls is one of Elizabeth Stuart, Queen of Bohemia, painted around 1623. Elizabeth is often known as The Winter Queen, for the brief period of her reign.

The longest gallery in England, stretching 176 feet along the top floor of the house. In theory, the gallery was intended as a place to exercise on rainy days, but in practice, many houses used it as a place to showcase family portraits and fine furnishings. It seems only appropriate then that the gallery at Montacute is used as a display area for portraits from the National Portrait Gallery in London.

Among the portraits displayed here is one of Robert Devereux, 3rd Earl of Essex, painted in 1620. Another shows the famous philosopher and scientist Francis Bacon, Viscount St Alban, painted around 1731. Off the long gallery are several smaller rooms including one dedicated to portraits of Elizabethan England, and another focussed on Henry VIII and members of his court.

Here you will find a portrait of Katherine Parr, painted on a wooden panel around 1545, and another of Lady Jane Grey, again painted on an oak panel, well after her death, sometime in the 1590s.

A separate room is devoted to portraits from the Jacobean court, including a very early portrait of James I. painted around 1608, and another of the king's favourite, the Duke of Buckingham and his family, painted in 1628. These are just a few of the highlights of what is truly a captivating display of period portraits.

I've visited Montacute on several occasions, and I love the house and the wonderful enclosed garden. The main facade of the manor house is one of the finest in Britain, a monument to family pride and wealth. Though the interiors are not as ornate as the exterior, that's actually a blessing, for you can really see the 'bones' of the Elizabethan house.

The long gallery paintings deserve special attention; you could spend hours enjoying the artwork. I was especially struck by the early portraits of Tudor monarchs painted on boards rather than canvas. It is remarkable that these works of art have survived so well. 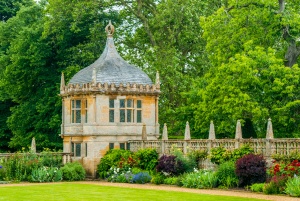 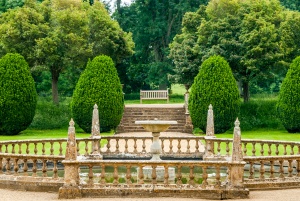 A fountain in the formal garden 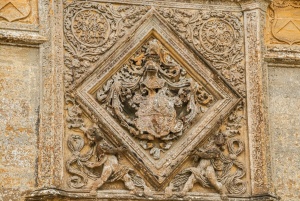 Coat of arms over the west door 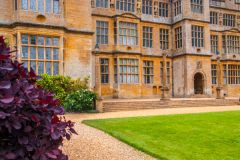 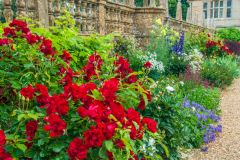 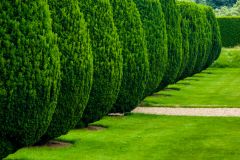 More self catering near Montacute House >>