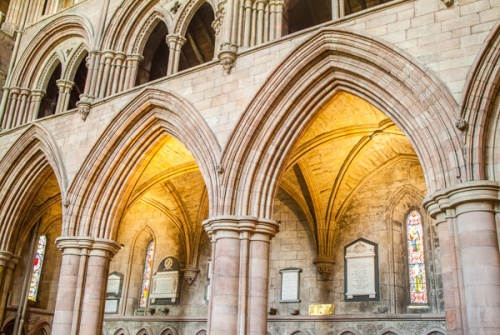 In the year AD 674 Queen Etheldreda granted land in Hexham to Wilfrid, Bishop of York. Wilfrid established a Benedictine abbey at Hexham that became one of the most prosperous abbeys in the north of England. In the 11th century that Benedictine abbey was superseded by an Augustinian priory.

The priory church was built from 1170-1250 and it is that building which we can see today. The priory was dissolved by Henry VIII but the church survived as the parish church of Hexham.

Hexham Abbey is predominantly Early English in style. The choir, north and south transepts and the cloisters all date from this period. The most easily noticed feature is the night stairs, a flight of 35 stone steps rising from the south transept to a broad gallery above the west door. It originally led to a dormitory for the canons of the priory, allowing them to access the church for night services. 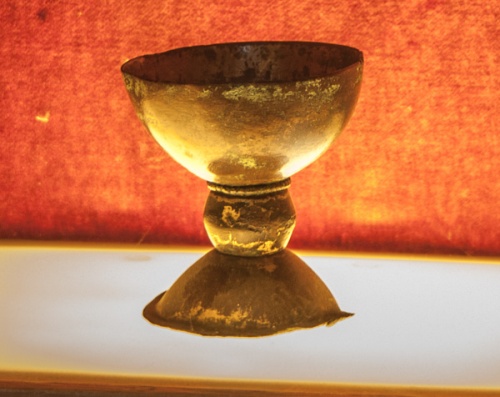 Remarkably, the crypt of Wilfrid's Saxon church is still intact, beneath the floor of the nave. A steep staircase leads down into a dimly lit chamber that is as it was in Wilfrid's time. Many of the stones used to build the crypt came from the old Roman fort at Corbridge, three miles away. There is a Roman altar stone, and two carved Roman stones set into the ceiling of the north passage of the crypt. The crypt can be visited during abbey opening hours.

In the south transept stands the fragmentary remains of a beautifully carved Saxon cross shaft. The inscription on the cross reads 'THE CROSS WHICH STOOD AT THE HEAD OF THE GRAVE OF ACCA BISHOP OF HEXHAM AD 709-732 WHO DIED AD 740'.

Acca was an 8th-century abbot of Hexham, who was buried near the eastern end of the church. His tomb was discovered in the early 11th century and moved to a location near the high altar in 1155.

Whether the cross that we see today actually stood at Acca's tomb or not is open to debate. Beside Acca's Cross is the Spittal Cross, a section of a smaller cross that once stood near the medieval hospital of St Giles. 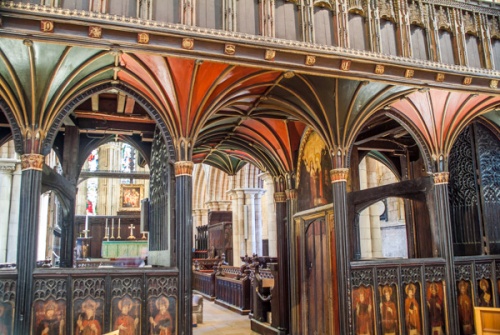 Near the bottom of the night stairs is an enormous block of sandstone, fully nine feet high, on which is carved a figure of a Roman soldier on horseback. The inscription tells us that this is Flavinus, a 1st-century standard-bearer in the Roman army stationed at Corbridge.

It is not clear when - or why - the stone was brought from Corbridge to Hexham Abbey, but we know that the 11th-century Augustinian canons laid it face up in the cloisters. It was discovered there in 1881 and moved to its present location. 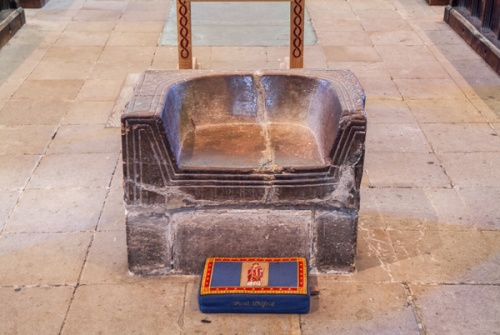 The 7th-century Frid, or Frith Stool

- One of the prizes of Hexham is the frith, or frid stool, a solid block of sandstone carved in the shape of a low seat. The stool may date to the 7th century, and may, indeed, have been made by Wilfrid himself. The stone may come from the Roman fort at Corbridge, where Wilfrid obtained many of his building materials.

The stool may have served as an early cathedra, or bishop's seat. Frith stools were used as a place of sanctuary; anyone who managed to reach the frith, such as a criminal fleeing justice, could not be touched until they were granted the assurance of justice and fair treatment. Sanctuary was used frequently, particularly during the lawless period of the Border wars, until it was finally outlawed in the Tudor period. 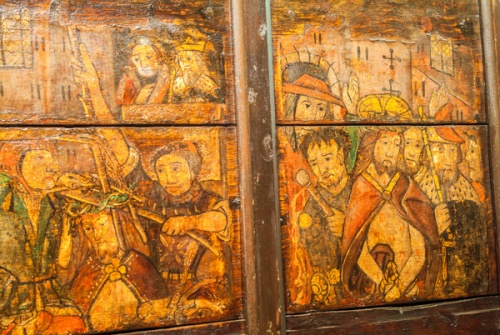 Detail of a painted panel from the pulpitum screen

Separating the nave and choir is a gloriously carved and painted screen, or pulpitum. This dates from the late 14th or early 15th century and was ordered to be made by Thomas Smythson, the prior from 1491 to 1524.

Another Saxon relic is a small copper and gold chalice, or cup, discovered in a stone coffin during renovations in 1860. The chalice was probably used by Saxon clerics to celebrate Holy Communion. It is on display in a protective glass case, but you can get a very close view of the wonderfully intricate workmanship.

The town of Hexham has a lot to offer visitors, and there are several historic attractions within a short stroll of the abbey. 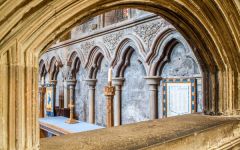 More self catering near Hexham Abbey >> 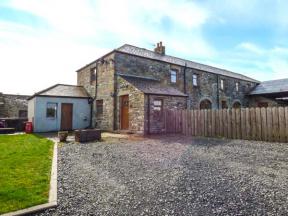