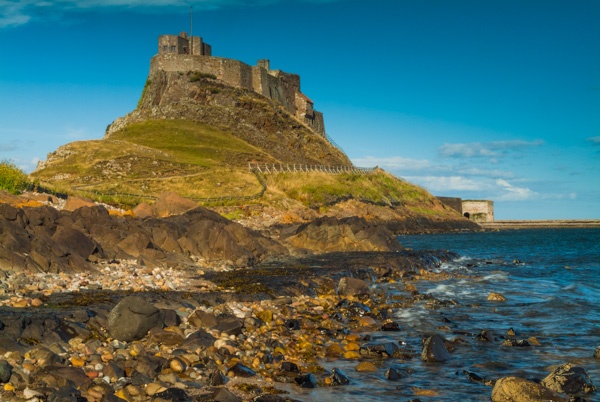 One of the most photographed castles in England, and for good reason, Lindisfarne Castle rises from a high outcrop of basalt as if it was a natural, organic part of the rock. Though it looks every inch a perfect medieval fortress, Lindisfarne is actually a sympathetic 20th-century restoration of a Tudor fort.

To understand the castle you have to understand the history of Holy Island itself. This tidal island is joined to the mainland by a long causeway, accessible only at low tide. Sometime in the 7th century, St Cuthbert established a monastery here, which over time became a great centre of learning.

A series of Viking raids led the monks of Lindisfarne to flee, taking the shrine of St Cuthbert with them. The saint would eventually end up at Durham Cathedral, and after the Norman Conquest the cathedral re-established a monastic presence here in the form of Lindisfarne Priory, home to the Benedictine order. 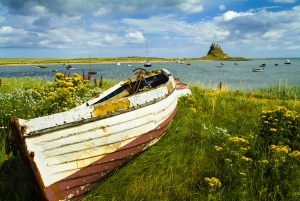 View from across Holy Island harbour

Never a wealthy monastery, the monks of Lindisfarne Priory fell upon hard times, and life became even harder in the 14th century when border raids from the Scots led them to fortify the monastic buildings. The monastery was destroyed during the Reformation, when Henry VIII's commissioners swept away all vestiges of monastic power.

But Henry did not simply destroy the priory on Lindisfarne and leave the island alone. Shortly after the priory was dissolved, the king ordered a fort built on a high plug of rock to the north of the monastic buildings, overlooking the harbour, a rock known as Beblowe. There may have been a small lookout tower on the site before Henry decided to build there. Certainly, the location seems perfect for controlling access to the harbour.

The first part of the fort to be built was an earthen bulwark, but it was not until the reign of Elizabeth I that proper defences were built in stone, using material from the priory ruins. This took place in the period 1565-1571.

You may see references to Lindisfarne Castle as 'built by Henry VIII' and imagine it to be like his series of coastal defence forts further south, those geometric forts that dot the south coast. But Lindisfarne is very much an Elizabethan rather than an early Tudor fort and bears no resemblance to other of Henry's coastal defences.

The Elizabethan builders constructed a formidable fortress, if small, constrained as they were by the size and shape of the rock on which the castle stands. A pair of gun batteries rise up out of the rock face, with a garrison block between them, creating a lower court and an upper court. The highest part, facing west, is the High Battery, where cannon peered through the battlements. 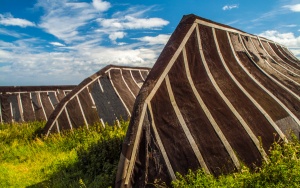 Despite its formidable appearance - or maybe because of it - Lindisfarne Castle saw action only once, in 1715, when it was seized by supporters of James Stuart, the Old Pretender. But the Jacobean Rising was a cause lost before it began, and Stuart supporters soon surrendered to government forces.

And so for centuries the castle slumbered on, and might have been lost to history if it were not for the efforts of one man. In 1902-3 Edward Hudson, founder of Country Life magazine, commissioned Arts and Crafts architect Sir Edwin Lutyens to convert the Elizabethan fort into a mock castle, adapting the garrison quarters into a house, and the Tudor cellars into a cosy suite of living rooms. Hudson wanted a comfortable residence far from the bustle of London life.

The result is unlike any English castle; quirky, almost bizarre, and utterly wonderful. The interiors feature original 16th century vaulted passages, but many interior features that look original are actually sympathetic mock-Tudor designs introduced by Lutyens to mimic the feel if not the actuality of the 16th century building. So you will find Tudor fireplaces, wood pannelled rooms, latched doors, decorative brick flooring and moulded roof beams, all made to look Tudor - and doing a very good job it must be said!

What we see today is only part of Hudson's grand plans for the site. He intended to build a large gatehouse and water garden, but these plans were never implemented. The castle was only used as a residence for some 70 years before it was gifted to the nation. It is now in the care of the National Trust.

Before the gates of the castle are a series of upturned boats that have been converted into huts - one of the most frequently photographed features of the castle. At busy times (i.e. summer) there are often crowds of people waiting to take a photo of the boats!

A short walk from the base of the rock on which the castle stands is a small walled garden designed by Gertrude Jekyll, which makes a lovely refuge on a hot summer's day - I speak from experience! This was originally a vegetable garden for the fort's garrison, but Jekyll transformed it into a lovely, if small, garden space. It has been fully restored by the National Trust, using Jekyll's original plans and planting scheme. 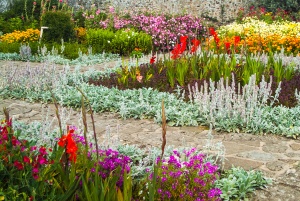 Any visit to Holy Island begins and ends with the vagaries of the tide. The causeway is only open when low tide permits vehicles to cross safely, and these times are posted at the mainland end of the causeway and on the official website for the castle and priory, and the island.

There are large car parks near the harbour, but access to the castle is by a relatively level walk of a mile, or by catching a shuttle bus service from near the priory. Details of all transportation and walking routes are clearly signposted, and its a lot simpler than it sounds. The castle access ramp is pretty steep, though short.

Lindisfarne is open seasonally, meaning it is usually closed during the winter months, so it's a good idea to check the National Trust website for opening dates. There are very limited facilities on the castle site, but there is a National Trust shop in the village and essentials like food and a loo!

Summing up Lindisfarne Castle
I loved visiting Holy Island. There is something about the place, something almost magical. It is rather 'touristy' as much of the island's economy seems to be focussed on people visiting the priory and castle, but its still a wonderful place to visit. But please don't think of visiting Lindisfarne Castle in isolation - it is just part of the whole 'Holy Island experience', with the priory, historic church, and the lovely coastal nature reserve and beaches to enjoy. 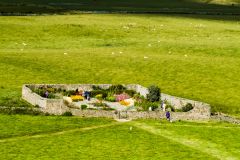 More self catering near Lindisfarne Castle

Self Catering near Holy Island