HERITAGE HIGHLIGHTS:   The oldest bridge on the River Tyne 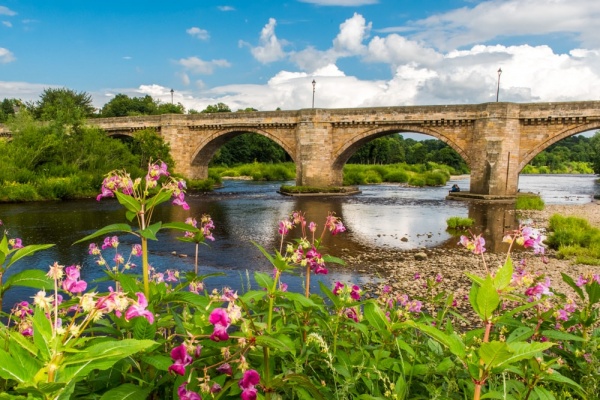 The beautiful stone bridge at Corbridge is the oldest on the River Tyne. The first bridge here was erected in 1235 by to replace an important ford. The Corbridge crossing was the only bridge between Newcastle and Carlisle and was essential to transportation in the north of England, including the main route north to Scotland.

We know that in 1235 Simon de Divelston was granted permission to build the bridge but the first record of it actually existing comes in 1256.

Money to keep the bridge well-maintained was raised by exacting a toll on iron goods including horseshoe, griddles, cauldrons, cartwheels, and nails.

In 1674 the medieval bridge was in poor repair so it was replaced by the present seven-arched structure. Yet the 17th-century builders did not destroy the medieval bridge but incorporated it into the new design, so that you could without too much stretching of the truth say that the Corbridge bridge dates to the 13th century.

Like the earlier bridge, it is said to have been built on Roman foundations. Certainly, the Romans did have a bridge across the Tyne; you can see bridge abutments near the Corbridge Roman Town (English Heritage). Tradition also suggests that the north abutment (the town side) rests on medieval foundations braced with oak tie beams.

You can still see 17th-century masons marks on the stones. Each mason had his own symbol, which he would carve into 'his' stones to ensure that he got paid for his work. 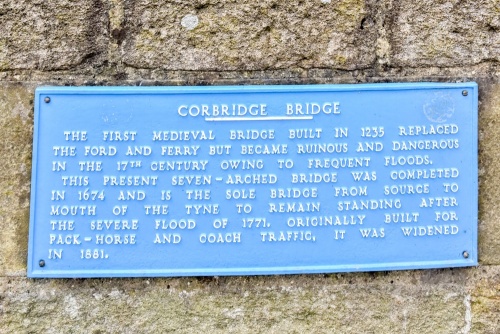 The original design had only 6 arches but an extra span was added at the south end of the bridge after the devastating floods of 17 November 1771. The flood swept away every other bridge over the River Tyne except the Corbridge bridge.

According to later accounts, the water level was so high that travellers could lean over the bridge parapet and wash their hands in the flood waters. The extra span ensured that if the water levels rose that high again the bridge would still reach the far bank safely.

The spans are of varying widths, from 13 metres to 20 metres (44 feet to 66 feet). There are triangular refuges for foot traffic.

The bridge is 146 metres long (roughly 479 feet). It was originally 12 feet wide (3.6m) but it was widened to 15 feet (4.6m) in 1881. The widening was accomplished by moving the parapets outwards and supporting their weight on stone corbels.

Despite the widening, it is still only wide enough to carry traffic in one direction at a time. For that reason, it is a bit of a traffic bottleneck as cars wait their turn for the lights.

The bridge is listed Grade I by Historic England.

You can easily stroll to the bridge from the centre of Corbridge. Just follow Princes Street (B6321) downhill to the riverside. Perhaps the best place to get a view of the bridge is from the south bank, where a footpath leads along the river. That's where the image accompanying this article was taken.

More self catering near Corbridge Bridge

Self Catering near Corbridge