This is one of the longer stretches of heritage coastline in England, taking in 40 miles from Amble to the Scottish border just past Berwick upon Tweed.

The coast is twice-blessed; first with long stretches of sandy beaches, and second with a shortage of visitors. Several beaches in particular merit mention. Cocklawburn near Berwick is home to ancient fossil beds, while Warkworth has a large expanse of sand dunes stretching inland from the shore. Low Newton showcases rare marine species, and Bamburgh has another belt of striking dunes protected behind a row of reefs.

Away from the bathing beaches, this coast has long, private stretches of dramatic black basalt headlands and tidal mudflats.

The Farne Islands, just off the Bamburgh coast, are a group of 30 small volcanic islets formed of striking black rock. The largest island is Inner Farne, which was once the solitary home of St. Cuthbert, who died here in 687 AD.

Cuthbert came to live in solitude among the large populations of grey seals and seabirds such as the puffins, eiders, razorbills and cormorants which still inhabit the islands. 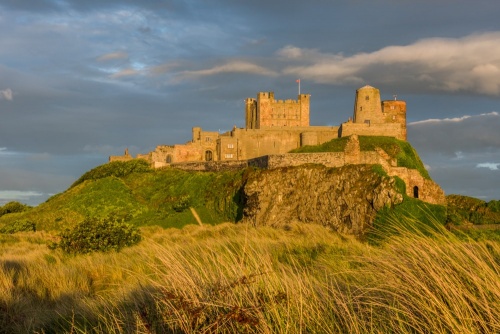 One other famous inhabitant of the islands was Grace Darling, daughter of the lighthouse keeper on Longstone, who in 1838 helped rescue 9 survivors of a wrecked steamship off Harcar Rock. Darling is buried in Bamburgh, and the village houses a museum detailing her heroic feat. Regular boats to the Farne Islands leave from the village of Seahouses, just south of Bamburgh.

Bamburgh itself is the former capital of the Saxon kingdom of Bernicia, but is better known today as home of the ornate stately home, Bamburgh Castle. The castle, with remains dating to the 12th century, was remodeled in Victorian splendour by William, Lord Armstrong.

Not to be outdone by the rich heritage of Bamburgh and the Farnes is the Holy Island of Lindisfarne. The island is accessible only at low tide via a causeway from the village of Beal.

St. Aidan established a monastery here in 635 AD, but the site is now occupied by a Norman priory. St. Cuthbert was later Bishop of Lindisfarne, and his grave was a popular pilgrimage centre after his death. The National Trust property of Lindisfarne Castle is a dramatic Tudor fortress remodeled as a private home in the early 20th century.

At Berwick the Tweed estuary is home to one of the largest colonies of mute swans in Britain. The walled town of Berwick itself is an enjoyable journey through history. The town changed hands no less than 14 times during the medieval period as the English and Scots struggled for control of the border region.

The lovely village of Low Newton-by-the-Sea is almost entirely owned by the National Trust, which also preserves the beaches at Low Newton and Embleton. 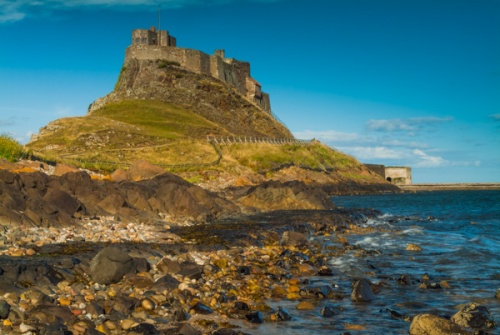 Northumberland National Park
The most northerly of the National Parks, Northumberland NP is also the least visited and the least populated, although that is due more to its location than to any lack of interesting reasons for visiting. The northern part of the park includes the conifer-rich Border Forest Park, and the southern border is defined by Hadrian's Wall. More ...