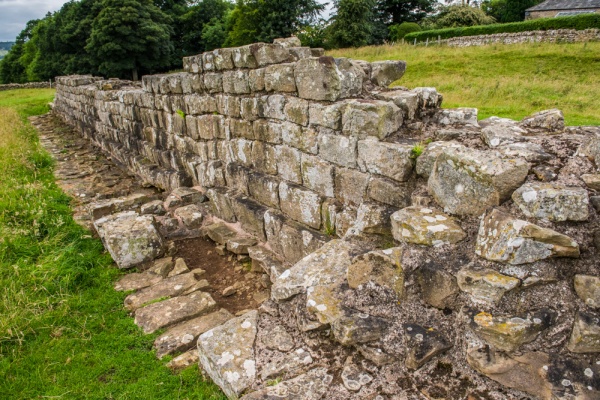 Planetrees is a short section of Hadrian's Wall, about 15 metres long. At Planetrees the Wall is narrow and is set upon very broad foundations. This illustrates clearly the change in plan that was implemented partway through the construction of the Wall when the initial wide Wall design was downsized to allow for a much narrower wall layout.

The first design for Hadrian's Wall designated a thickness of 10 Roman feet. Sections built to this plan are termed 'Broad Wall'. This plan was later altered to call for only 8 Roman feet in width. These sections are termed 'Narrow Wall'. Why was the plan changed? Various theories have been put forward, from lack of local building materials to expense, but the most likely theory is that the Romans simply wanted to finish building the Wall as quickly as possible and the narrower design speeded things up.

At Planetrees the east end of the wall section is set on broad wall foundations 2.8 metres wide, while the west end is a narrow wall, only 1.75 metres wide.

The broad foundation suggests that the soldiers laying the base layer for the Wall worked faster than the soldiers building the superstructure. By the time the plans were altered to build on a narrower plan large sections of the Wall's foundation had already been built on a wide base.

The Planetrees section of the Wall was constructed shortly after the wall commenced in AD 122. It is fascinating to see how the builders altered their initial plans.

Planetrees is one of the more awkward English Heritage sites on Hadrian's Wall to reach. It is fairly easy if you are walking Hadrian's Wall Path, but if you are coming by car it is a challenge. The site lies just south of the B6318 southwest of its junction with the A6079 outside Chollerford. If you use the official postcode for your satnav you will end up at a house further west along the B6318.

There is no parking near the site, so you need to continue east along the B6318 to a layby on the north side of the road, where a large wooden cross marks the start of a footpath leading to Heavenfield church. The church stands near the site of a famous battle in AD 634 when King Oswald of Northumbria defeated the armies of Cadwallon of Gwynedd.

A footpath leads from the layby, following the course of the B6318 west through two fields. You reach a gate where the path crosses the paved road and enters a field on the south side of the road. You will see the Planetrees section of Hadrian's Wall directly ahead of you in the field. From the layby to the Wall takes about 10 minutes for a reasonably fit person. Its a bit longer returning, as the path leads up a hill! 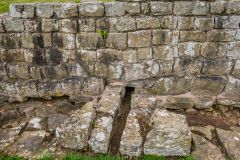 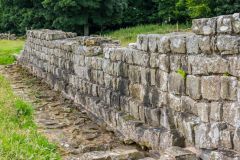 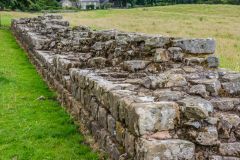 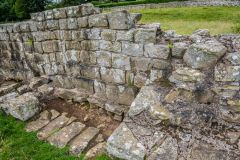 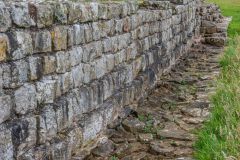