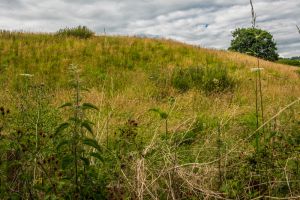 Wark in Tynedale Castle is a 12th-century motte and bailey fortification, probably built by the Earl of Northumberland in 1139. A subsequent castle replaced that early one in 1165. There is little remaining beyond the motte, and farm buildings now stand on the site.

The location, known as Moat Hill, was originally used as a moot, or meeting place by the Anglian Council. In 1165 William the Lion of Scotland built a motte and bailey fortification on the moot hill and made it the centre of the Liberty of Tynedale.

The Scottish crown held Tynedale liberty until 1295, after which the castle was used as an administrative centre for the lordship. In 1495 the liberty status was removed and Tynedale was subject to the laws of state once more.

The earth and timber fortifications were rebuilt in stone around the turn of the 14th century, though the stonework is only mentioned in documents in 1399. The tower fell into ruin by 1541 and was rebuilt.

In the late 17th century the top of the motte was levelled, and a manor known as Ratcliffe House was built on the castle site in 1676. Of the manor, nothing but a doorway remains, inserted into a later farm building. The doorway may have formed part of the 1541 fortified tower, though it bears a stone inscribed with the date 1676.

The manor of Wark was granted to Greenwich Hospital after 1715, then purchased by the Duke of Northumberland in 1835.

Two short sections of earthworks are visible, one at the north side and the other at the south-east corner of the motte.

Note
Do not confuse Wark in Tynedale Castle with the castle at Wark on Tweed, further north.

We were fortunate to run into a local resident, or I don't think we'd have had any notion of where to find the castle motte. The motte is directly opposite the Battlesteads Inn on Hexham Road, on the southern fringe of Wark village.

The top of the hill has now been used to create several modern houses, so there is no longer any access to the castle site. If you walk up the hill towards the houses you can clearly make out the shape of the motte through the trees and later buildings, and if you walk (carefully) south along the verge of Hexham Road you can get a reasonable view of the mound over a stone wall bordering the road. 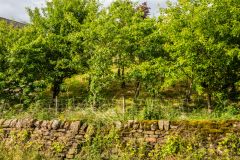 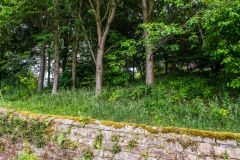 More self catering near Wark in Tynedale Castle >>

More bed and breakfasts near Wark in Tynedale Castle >>