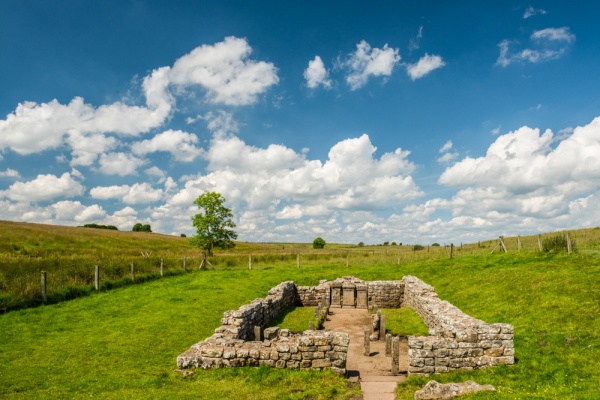 One of the least known and yet, most interesting, of the Roman sites along the course of Hadrian's Wall, Carrawburgh Temple of Mithras is a 'mithraeum', or temple dedicated to the god Mithras, a form of sun god whose cult became extremely popular among soldiers of the Roman legions.

The Temple stands close to the site of Carrawburgh Roman Fort, known to the Romans as Brocolitia. The fort is largely unexcavated, but the temple has been well examined. On display are copies of mithraic altars found during excavation on the site.

The Temple was founded in the 3rd century, and went through three distinct phases of construction. The first phase began around the year AD 200, and created a rectangular temple measuring about 5.6 by 7.9 metres. About AD 222 a second phase occurred, with an extension added to the north. Further rebuilding and interior redesign took place during the course of the 3rd century. 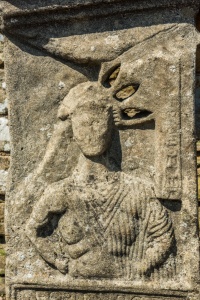 The temple was destroyed in AD 297, then reconstructed at the turn of the 4th century, before it was finally destroyed for good around AD 330. That final destruction was quite possibly the work of Christians, who tended to see Mithraism as a threat.

Excavation revealed a large altar to the Nymphs and Genius Loci (spirit of the place) standing just outside the temple entrance.

Excavations at the site also uncovered a shrine to the water nymph Coventina. Unfortunately, that shrine can no longer be seen.

What you can see, however, has been reconstructed to show the mithraeum as it would have looked in the early 4th century. The altars, statues, and wooden posts supporting the aisles are all plaster casts of the originals. A full-scale reproduction of the Carrawburgh temple has been created at the Museum of Antiquities in Newcastle.

Inside the temple entrance is a small lobby with a hearth and statue of a mother goddess. A wooden screen separates the lobby from the main temple. Within the main body of the temple are statues of Mithras' attendants Cautopates and Cautes. A narrow central passage is flanked by two earthen benches. The far end of the temple housed three altars, one depicting Mithras with his crown. Rituals, including sacrifices, would be conducted in this altar area.

Mithraism was based on the story of Mithras, an Eastern sun god. According to Mithraic legend, the first creature created on earth was a bull, who lived in a dark cave. Mithras entered the cave and slew the bull. The bull's blood gave life to all manner of creatures. The basic conflict of new life gained through sacrifice was too close to the bone for some early Christians, who became violently opposed to Mithraism. On the other hand, Mithraism was very popular among Roman soldiers, which accounts for the Temple's close proximity to Brocolitia fort.

Mithraic temples were small, cramped places, meant to represent the bull's cave. At one end stood three altars, and before them a large sculpture or painting of Mithras. Mithraic ceremonies involved pulling back a curtain high in the wall so that sunlight shone on the depiction of Mithras slaying the bull. The intent was clear; to show the power of light over darkness. Again this shows some similarities with Christianity, though the form of worship is different.

There is a large pay and display car park on the south side of the B6318. Parking is fairly expensive, but you can use the same parking ticket to stay at any of the other main Hadrian's Wall parking areas for free within a 24 hour period. There is a trail from the western end of the parking area that leads past the site of Brocolitia fort. The fort is on private land but the owner allows access to visitors. You can climb to the top of the fort's earthen walls, though there is very little to see beyond the general outline of earthworks.

From the fort gate, the trail curves into to the south and west to approach the Temple of Mithras from the south. The Temple foundations clearly show the layout of the building and there is an information panel showing how the site was built and how it evolved over time.

The most interesting feature for me is the altar to Mithras at the north end of the Temple. The altar is pierced by three holes, and a candle or lamp would have been placed behind the altar so that its light shone out through the holes. This was meant to recreate the story of Mithras entering the bull's cave, and it must have been an impressive sight when you consider that the temple interior would have been dark except for the flickering candlelight. 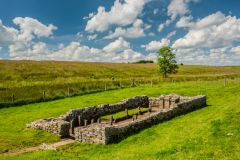 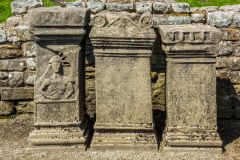 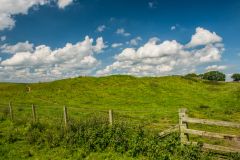 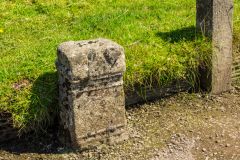 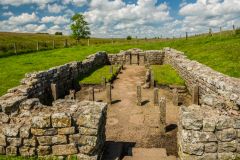 More self catering near Carrawburgh Temple of Mithras >>

More bed and breakfasts near Carrawburgh Temple of Mithras >>