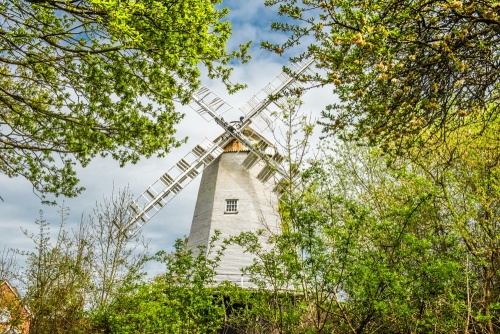 The largest mill in Sussex, Shipley Windmill is an eight-sided smock mill built in 1879. Smock mills are so named because their shape was supposed to resemble a farm labourer's smock. The mill is four stories high and stands atop a brick base that is two stories in height. The windmill from
the adjoining footpath

The mill was once owned by writer Hillaire Belloc, who lived in the neighbouring house of King's Land (sometimes called Kingsland). A descendant of Belloc still owns the site. The mill operated regularly until 1922 and has been restored several times since then.

For many years the mill was operated by a charitable trust, and visitors could see the inner workings of the mill machinery and watch flour being ground. However, the visitor centre at the mill is now closed to visitors and the interior cannot be viewed.

The mill exterior, however, can still be viewed from the public footpath that runs directly beside the building, so we've left this article online.

We've explored the footpath and you can get a very good view of the mill, though it is a shame you can't actually visit it any more. There is a free layby for parking on the main road through the village, between the mill and the medieval parish church of St Mary. 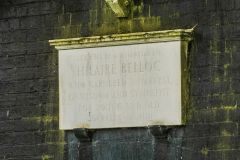 About Shipley Windmill
Address: Shipley, West Sussex, England
Attraction Type: Historic Building
Location: 8 miles SW of Horsham off the A272. The mill is on the western edge of Shipley and can be seen from a footpath immediately beside the property.
Website: Shipley Windmill
Location map
OS: TQ143219
Photo Credit: David Ross and Britain Express

More self catering near Shipley Windmill >>