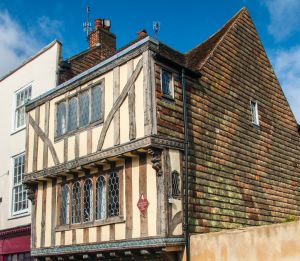 One of Canterbury's best half-timbered buildings. 8 Palace Street is a 13th-century building with later additions. It may have been built as the rectory for the nearby church of St Alphege.

The building is constructed with two projecting upper stories over a ground floor, each upper story projecting further than the last. The upper floors may be 15th century. It is also possible that the frontage we see facing onto Palace Street may have been brought in from another building.

NB. The house is private property, and is not generally open to visitors, though the carvings can easily be viewed from the street in front of the house. There are at least two further historic buildings further along Palace Street; Conquest House, and Sir John Boys House.

More self catering near 8 Palace Street >>