HERITAGE HIGHLIGHTS:   All the old houses have arched windows outlined in white - all the better to bring luck. 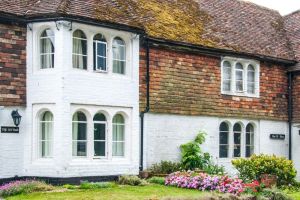 The village of Pluckley is known for two things; one of which it is rather proud of, and the other most inhabitants wish would go away. The first is that the attractive little village was the film location for the popular television series The Darling Buds of May. The second is a rather unwelcome reputation as the most haunted place in Britain. The Pluckley ghosts are the stuff of legend.

One ghost is a lady member of the Dering family, local squires, who searches the churchyard for her unbaptised child. Another Pluckley ghost is a gypsy woman who burned to death when a spark from her pipe set her shawl on fire. Then there's the labourer who fell into the vat for mixing clay at the local brickworks.

The Ghosts of Pluckley

How on earth did Pluckley get the reputation as the most haunted village in England? The fault probably lies at the door of the Guinness Book of Records, which 'awarded' Pluckley that distinction in 1998. Every Halloween ghost-hunters and other, er, enthusiasts, descend upon the village in a peculiar annual rite.

The first known mention of ghosts in Pluckley dates to 1955, in a book by Frederick Sanders. Other stories have been added to the mix over the years, and a great many stories have been concocted to embellish the more commonly recognised 'real' accounts.

Of the dozen most often repeated ghost reports, there are a phantom coach and horses, a colonel who was hung in Park Wood, a ghostly highwayman killed while hiding in a hollow oak tree, a Red Lady of the Dering family, and a Tudor Lady living at Rose Court who drank poison.

It is said that a White Lady wanders the Dering chapel in St Nicholas church, and has also been seen in Surrenden, the Dering family home. Interestingly, a blocked up passage connects the house with the organ loft of the church. A mysterious old lady has been reported to appear in a window of the Dering Arms.

In addition to these 'ghost' appearances, owners of the Black Horse inn have reported objects that are mysteriously moved to odd locations, or appear and disappear.

If ghosts don't convince you to visit Pluckley, perhaps the peculiar widows of Pluckley's old houses will. Back in the 19th century, the local squire, Sir Edward Dering, decided that round-arched windows would bring luck. So, with laudable zeal, he had every window in the village converted to be circular-headed.

It's a strange sight; you don't notice it at first but when house after house has the same Romanesque style windows, looking for all the world like arched eyebrows outlined in white paint, it all starts to look a bit peculiar. Even the village pub has arched windows.

The parish church of St Nicholas contains tombs of generations of the Dering family, including a wonderful collection of brasses ranging from 1425 to 1610. The Dering coat of arms is even engraved on the 15th-century font.

And, in case you're wondering, I didn't see a single ghost while visiting Pluckley! Whether that's a good thing or a bad thing I leave up to you. 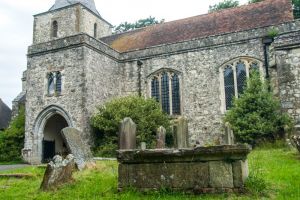 More self catering near Pluckley >>

More bed and breakfasts near Pluckley >>