HERITAGE HIGHLIGHTS:   The scissor beam roof is a triumph of 14th-century timber construction. 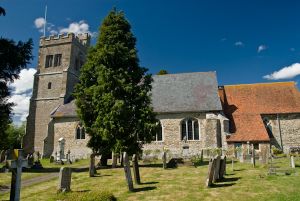 The parish church of Smarden is known as the Barn of Kent, a tribute to the width of its aisleless nave. The nave is 36 feet in width and is supported by a scissor-beam roof system of intersecting timbers.

Though the list of rectors for St Michaels goes back to 1205, we know almost nothing of the church those early rectors would have served. The current church was built between 1325 and 1350 of local Kentish ragstone and Bethersden marble quarried ar nearby Tuesnoad. The embattled west tower was added at the end of the 15th century.

The west window and the nave windows feature 15th-century stained glass. There are holy water stoups beside both the north and south doors; these are 14th century. The font is 14th century, remodelled with a much newer base.

The Lady Altar traces its origins back to 1392 when Stephen Morton and Simon Chedmynden founded a chantry here, with monks to pray for their souls. The brothers who performed these services lived in 'the Brothers' House' in the village.

Near the easternmost window on the north wall is a stone carving of a grotesque head. Though of obviously ancient vintage there is no explanation of its purpose.

The wooden alms box has been in place since at least 1533. Much older is the copper plate attached to the lid of the box. This is 13th century and came from France.

In the sanctuary is a three-seat sedilia (canopied priest's seat) from the 14th century and a piscina of the same date.

Near the piscina is a very intriguing alcove set into the wall. This may possibly have been a wafer oven, for baking communion wafers. In the north wall of the sanctuary is a rather plain Easter sepulchre.

More self catering near Smarden, St Michael the Archangel >>

More bed and breakfasts near Smarden, St Michael the Archangel >>