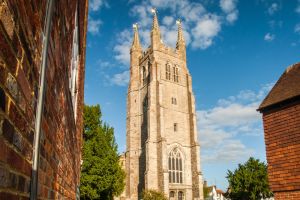 St Mildred's is a fine 12th-century church with a splendid 15th-century tower. The church was begun in the 12th century and expanded several times. The imposing tower, which seems to loom over the town, was added in the 15th century when Tenterden was at the height of its prosperity from the medieval wool trade.

The nave is 12th century, the south aisle a century younger, and the north aisle is 14th century.

St Mildred was a 7th-century princess of Kent, who served as abbess of the nunnery at Minster-in-Thanet. Tenterden manor was granted to Thanet Minster around the time of Mildred's death.

The Lady Chapel contains an amusing 17th-century monument to Robert and Martha Whitfield. Martha was recorded as having been caught 'chiding and brawling' in church with another Tenterden woman.

Horatia, daughter of Admiral Horatio Nelson, was married to Philip Ward, vicar of Tenterden. Relatives of authoress Jane Austen are also buried in the church.