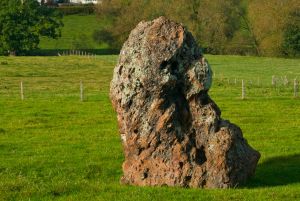 Across the River Chew is a further stone called 'The Outlier' or 'Hautville's Quoit'. It seems most likely that all the stones were erected as part of a single, unified complex.

The Great Circle at Stanton Drew stands west of the village, and stretches 120 metres in diameter, making it the second-largest in England after Avebury. There are 26 stones remaining in the Great Circle, though there would originally have been more.

To the south of the village are two further monuments; a circle of 13 stones, and the Cove of three stones (one fallen). The Cove can be seen in the garden of the Druid's Arms pub.