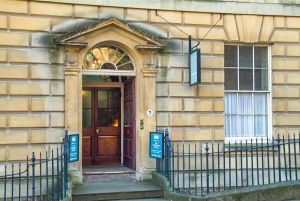 Bristol's Georgian House Museum
This quiet 18th-century townhouse was built by a wealthy sugar merchant and offers a glimpse into daily life in Georgian Bristol, above and below stairs.

John Pinney (1740-1818) was a sugar merchant and owner of a slave plantation in the Caribbean. When he returned from the Caribbean, his fortune made, he built this elegant Georgian house just off Park Street. The house, begun in 1790, stands 6 storeys high and has been completely restored to its original 18th-century state, reflecting the life of a wealthy merchant, his family, servants, and one African slave.

One of the intriguing features of the Georgian House is that it looks not only at the life of Pinney and his family but at the life of an African slave named Pero Jones. Pinney bought Pero in 1765, when he was just 12 years old, to work on his Mountravers plantation on the island of Nevis.

When the Pinney family moved from Nevis back to Bristol in 1784 they brought Pero with them. He lived in the Georgian House and served as Pinney's personal manservant for 32 years. A footbridge by the harbour in Bristol is named in Pero's honour.

Pero was of African origin but was probably born on Nevis. He must have been a very bright young man, for he learned to read and write, and even did some trading in small goods on the plantation. When Pinney moved from Nevis to Bristol, he brought Pero with him, though he left behind Pero's 2 sisters, whom he had also purchased. John Pinney eventually freed Pero, but he continued working with the Pinney family until his death in 1798 at the age of just 45. The museum is very much an 'Upstairs / Downstairs' experience, with the dining room, drawing room, library, study, and bedrooms illustrating domestic life in the 18th century for the owner and his family. The 'below stairs' part of the house comprises the kitchen, laundry, and housekeeper's room.

The dining room is shown set for a dinner party, with the family's best china intended to impress guests. By contrast, the study is simply furnished. Bookcases line the walls, with volumes on geography and plant life showing John Pinney's interests. The drawing room was where the Pinneys entertained their guests, among whom were such famous names as poets William Wordsworth and Samuel Coleridge, as well as Lady Frances Nelson, wife of the Admiral.

One fun feature, especially for families, is a hidden staircase used by servants to access the upstairs rooms without being seen. Look for the cold water plunge pool, used by Pinney. He must have been a brave man! Then there is the housekeeper's room, where she administered the hundreds of little tasks needed to run the house. Another curiosity is a portrait of the abolitionist Hannah More, which seems ironic given that the Pinneys owned slaves.

Our family enjoyed the museum enormously. It was a fascinating glimpse into the life of a Georgian family and the servants that worked for them. The special feature here is the glimpse of the slave Pero's life. Bristol merchants were heavily involved in the sugar trade, and so much of that trade was built on the backs of slave labour. Pero's life provides a fascinating and troubling glimpse into this often-overlooked part of our Georgian heritage.