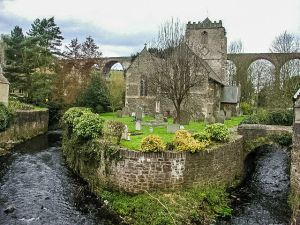 Pensford, St Thomas Becket Church
St Thomas Becket is a redundant church set beside a striking Victorian railway viaduct. The church is a 14th-century building set on the banks of the River Chew. Its location is what led to the church falling out of regular use, as in 1968 it was badly damaged when the river flooded.

The same floods weakened the railway viaducts, which were declared unsafe, so both the viaduct and the church fell into disuse at the same time. The church was made redundant in 1971, and the tower was placed in the care of the Churches Conservation Trust.

Attempts were made to convert the body of the church into an arts centre, but the extent of damage to the building made the cost of conversion uneconomical. The building sat unused until 2008 when it was sold into private hands for conversion to a private dwelling.

The conversion process was documented by the BBC for the first episode of its 'Restoration Home' TV programme.

The tower and vault are 14th century, and the west tower door is 15th century, in Perpendicular style. The tower rises in three stages and is supported by angle buttresses at the base. A polygonal stair tower projects from the south-east side.

The font is also 15th century and is carved with figures of roses and quatrefoil patterns. The interior features a beautifully vaulted ceiling, a finely carved Jacobean pulpit, benefaction boards and painted Biblical texts.

The church is usually open daylight hours, but do remember that there is no access to the body of the church, just to the tower.