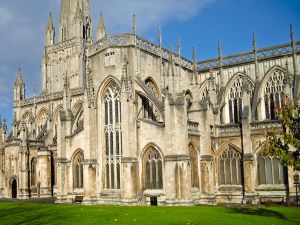 On a visit to Bristol in 1574 Queen Elizabeth is said to have called St Mary Redcliffe "The fairest, goodliest, and most famous parish church in England." Whether she actually uttered this oft' mentioned quote is another story, but the sentiment holds true even today; St Mary Redcliffe is a superb church, full of historical and architectural interest.

The first church on this spot was built in the early 12th century, at a location beside the medieval Portwall and close to the harbour and quayside, where you will find the red sandstone cliffs which give the area its name. During the medieval period, the area became prosperous as the home of merchants who moved outside the walls of Bristol to avoid high taxation.

One of these successful merchants was William Canynges (1399-1474) who became five times Mayor of Bristol and paid for much of the fine 15th-century work we see today. Canynges is remembered with not one, but two, memorials within the church he helped to create.

Another medieval merchant, William Spenser, initiated the tradition of Rush Sunday services. In a tradition now dating back over 500 years, a Whit Sunday service involving the Lord Mayor and high civic officials of Bristol is held, during which the floor of the church is strewn with fragrant nosegays, herbs, and posies.

Above the interior of the north door is a model of the sailing vessel Matthew, in which one of Bristol's most famous seamen, John Cabot, sailed to the New World in 1497. In the church is a whalebone brought back by Cabot from his voyage.

In the south aisle is the tomb of Admiral Sir William Penn, a Civil War naval commander who later gained the favour of Charles II (not an easy task given that Penn sailed for Parliament!). Penn loaned Charles great sums of money, which the king was unable to repay. In lieu of the money, Charles granted Penn's son, also named William, a grant of land in the New World, land which became the state of Pennsylvania.

The church is cruciform, with a striking west tower, at 292 feet the third highest in England. The oldest sections of the current building date to 1185, but much of the nave and transepts, however, date to the 14th century. One of the most impressive features of St Mary is the superb, vaulted north porch. The inner porch is Early English, about 1185, the outer section was added around 1325.

Above the porch is the Chatterton Room, named for the boy poet Thomas Chatterton, who wrote some of his works here. Chatterton thought he was too young to be taken seriously as a writer, so he forged documents, including his 'Rowley poems', and claimed they were the work of a 14th-century monk. Chatterton died tragically at the age of only 17.

The Lady Chapel is worth mentioning; it was built in 1385 and enlarged in 1494. The richly coloured modern stained glass is a replacement for medieval glass destroyed in bombing raids during WWII. The box pews in the nave are wonderfully carved, as is the pulpit - interestingly, the craftsman was  Victorian Quaker, William Bennet, who used fellow Quakers as models for the apostles, and his own children as models for the angels on the pulpit.

One of the great glories of St Mary Redcliffe is the beautiful nave ceiling, which boasts 1200 beautifully carved and gilded bosses. Indeed, magnificent medieval carvings are everywhere you look, including a series of amusing gargoyles now sited at ground level.

St Mary Redcliffe is one of the finest medieval parish churches in the land, and well worth a visit. Perhaps you will find yourself agreeing with Queen Elizabeth's quote. 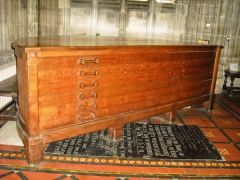 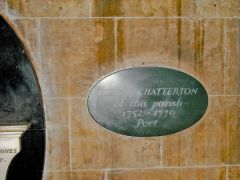 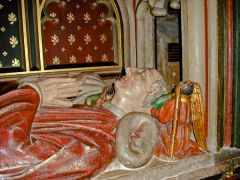 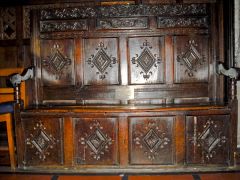