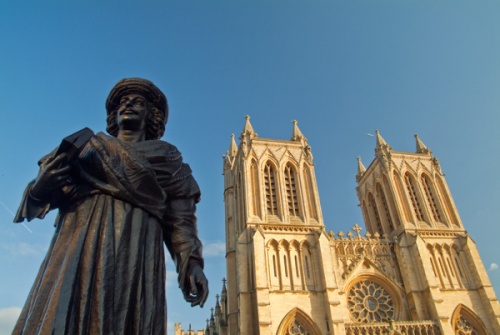 Established by Augustinian canons in 1140. Of the early Norman church little remains but the chapter house (1150-70). The chancel, aisles, and Lady chapel were built 1298-1330. What makes Bristol unusual for England is that the aisles are built to the same height as the choir, in the style common to the late German Gothic "hall church".

The chancel contains one of the earliest examples of lierne vaulting in the world. A little overwhelmed by this later work is an Anglo-Saxon carving dated to 1000 AD of Christ at the Harrowing of Hell.

Around 1140 Robert Fitzharding, later to become the 1st Lord Berkeley, founded an abbey for the Augustinian order. Of that first church, the best remaining features are the chapter house, gatehouse, and transepts.

The chapter house is one of the finest pieces of Norman architecture in England, a superb example of 12th-century style, with beautifully carved vaulting and arch decorations, using tradition Norman motifs like floral patterns and geometric designs.

In 1220 the Elder Lady Chapel was built under the rule of Abbot David, whose tomb lies just outside the chapel. The mason responsible may have been Adam Lock, who also served as a master mason at Wells Cathedral. The chapel walls are lined with carvings of animals, and within the chapel are the tombs of Lady Margaret Mortimer and Lord Maurice Berkeley. 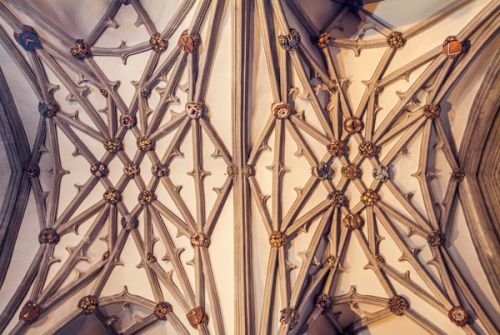 The Reformation had a profound effect on Bristol Cathedral; the nave of the abbey church was undergoing a complete rebuilding when Henry VIII began his Dissolution of the Monasteries, and when the abbey was dissolved in 1539 the nave was incomplete.

The church might have simply been allowed to fall to the ground if Henry hadn't decided to create a series of new cathedrals. The citizens of Bristol put forward a concerted lobbying effort and were able to convince the king that Bristol, as the second busiest centre of commerce in England, was deserving of a cathedral. The abbey church was rededicated in 1542 and became Bristol Cathedral.

It must have been a peculiar experience visiting the new cathedral, as the nave remained unfinished and unused for 3 centuries following the Reformation. Then in 1868 GE Street, responsible for so many mid and late Victorian churches, was called in to build the nave in Gothic Revival style.

Street, aided by JL Pearson, created a masterpiece of Victorian Gothic, with a French-style west front, a stone choir screen, a stone pulpit and ornate reredos, all blending with the earlier medieval work.

Though the Victorian west end of the church is a triumph of Gothic Revival art, it is the east end that is the glory of Bristol. The beautifully ornate carving and hall-church style is unmatched by any other English church. It is quite simply magnificent, and a testament to the medieval craftsman who worked on the church.

The choir was built in 1298, though the choir stalls were added in the 16th century. The stalls incorporate a series of excellent misericords, or 'mercy seats', offering much-needed support to monks who had to stand through long services. Among the fanciful misericord carvings you will see a mermaid, men wrestling, and a scene depicting the popular medieval entertainment of bear-baiting. The organ was made in 1685 by Renatus Harris.

In the south transept, you can see the night stairs which led monks from their dormitory for midnight services in the church. Also in the transept is the Saxon carving of the Harrowing of Hell. The carving probably dates to the late 11th century, shortly before the Norman Conquest, and is one of the finest Saxon carvings in England. It was found under the chapter house floor, acting as a coffin lid.

The north transept has numerous memorials to citizens of Bristol, including many who went to the West Indies to make their fortunes. The roof of the transept is a superb example of late medieval vaulting, with beautifully carved bosses. Look for the boss depicting the murder of Edward II at nearby Berkeley Castle.

There is so much to see inside the cathedral; look for the peculiar star-shaped tomb recesses, and memorials to the medieval lords of Berkeley Castle, and don't miss the 14th century stained glass panels that line the cloister walk.

More self catering near Bristol Cathedral >>