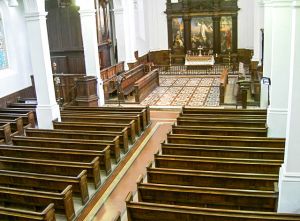 Bristol, St Thomas the Martyr
A late Georgian church in neo-classical style, St Thomas was built over the years 1792-1793 by architect James Allen, who incorporated parts of an earlier 15th-century church on the spot.

The west tower dates from that medieval church and retains a bell cast locally in the 15th century. Also surviving from the earlier church, though not nearly so old, are the west gallery overlooking the nave (1728-1732) and the reredos (1716). This is a fascinating piece of 18th-century theatre; decorated with Corinthian columns and pilasters.

Though the reredos frame is 18th century the colourful paintings on it are the work of Fritz von Kamptz and were inserted in 1907. The altar rails are Georgian but the altar table itself was made in 1879. The original 18th-century communion table is now in the south chapel. The lectern was made from the original Georgian font.

There are quite a lot of Georgian furnishings, though some aspects of the interior have a distinctly Victorian air - the result of a renovation in 1896. The 18th-century box pews were cut down in the Victorian restoration, and the extra oak panelling used to create wainscotting for the aisles. The marvellously carved organ case is 18th century. 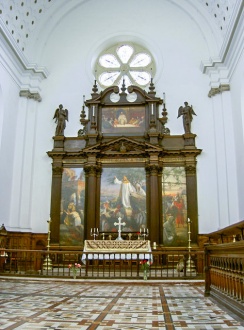 The church was probably built in the late 12th or early 13th century, shortly after Thomas Becket was canonised. It was rebuilt in the 15th century when the striking tower was added. The tower sports a 'Bristol spirelet' in one corner.

The parish of St Thomas was traditionally the home of Bristol's wealthy cloth merchants. as a result, these rich merchants became patrons of the church and lavished money on creating a richly decorated building and on building ornately decorated monuments for themselves and their families. The church was always well attended and was a place where the wealthy and influential patrons could meet and be seen.

When Henry VIII initiated the Anglican break from Catholic worship he declared that Thomas Becket should no longer be considered a saint. As a result, all mentions of the church dedication in the parish records had the words 'the Martyr' crossed out.

A new parish seal was designed in 1567 that referred to 'Thomas the Apostle of Jesu Christ'. Henry VIII is long gone, and the full dedication to Thomas the Martyr is used again.

During the religious turmoil of the 17th century, those patrons would have had an interesting time listening to the sermons of Rev. Richard Thompson, an extreme High Anglican minister who preached against the terrors of Dissenters.

He called Presbyterians an embarrassment to the devil and was known to denounce civic officials and religious figures during his sermons. He even famously declared that Elizabeth I was a 'lewd and infamous woman'.

In the 13th century, an almshouse stood near this spot. The almshouse was destroyed in a WWII bombing raid, but two small medieval statues were rescued, including one of St Thomas Becket, and both statues were brought into the church where they can be seen today.

The church fell out of use after the war and was declared redundant in 1982. It is now in the care of the Churches Conservation Trust and is usually open weekdays.

More self catering near Bristol, St Thomas the Martyr >>

More bed and breakfasts near Bristol, St Thomas the Martyr >>