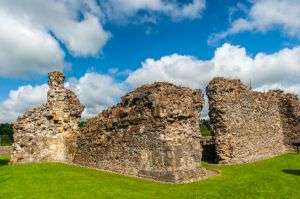 The atmospheric remains of a 12th-century Cistercian monastery standing beside the River Ribble. The abbey was founded in 1147 by William de Percy, and is built to the traditional Cistercian plan, with the abbey church forming the north range of the cloisters, lay brother's quarters on the west range, an east range featuring the chapter house and monk's quarters, and further domestic buildings on the south range.

Sawley Abbey was dissolved by Henry VIII in 1536, forcing the monks to leave, however, when the abortive uprising known as Pilgrimage of Grace prompted them to briefly reoccupy the abbey. The king was enraged by the monk's temerity and sent a force under the Earl of Derby to deal with Sawley. Abbot William Traford was executed for treason, and the monks left Sawley for good.

Parts of the 12th-century church still stand, as does the abbey gatehouse. A large number of earthworks surround the abbey ruins. These are probably the remains of stock enclosures, gardens, and service buildings for the abbey.

The abbey ruins are set within a high stone wall with a gate. In theory, the gate is open from 10-5pm most days, but I came late one day and the gate was still open well past the official closing time. I suspect that the gate opening depends on a local keyholder and exact hours may depend on their schedule. At least it was open outside posted times, rather than locked when it was supposed to be open!

There are several interpretive signs around the site with layout plans to show how the site would have looked at the height of its existence. Sawley was not a large site, and you can easily explore the existing ruins in 30 minutes. When we visited there was scaffolding covering some of the largest building remains so they could be stabilised and made safe for visitors. Hopefully, the safety work will be complete soon and the scaffolding removed.

Against the stone wall surrounding the site is a large number of carved stone fragments found on the site. The detail of carving on several of these stones is exceptional, though worn, and it gives some idea of just how beautiful the abbey buildings would have looked when they were new.

Several features were especially notable and in better condition than other parts; beside the west tower of the church is the night stair, made for the monks to easily visit the church for nighttime services. Opposite this are several intriguing, small chapels, with small raised altars at the end of a rectangular space. The Lay Brother's Refectory, with its wide fireplace opening, is in excellent condition, and you can easily see a long sewage channel than served the monk's reredorter, or latrine. 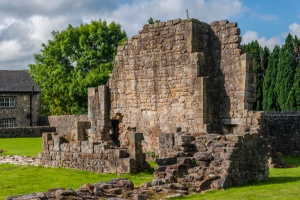 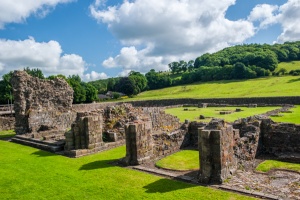 Side chapels in the abbey church 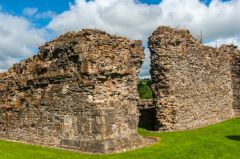 More self catering near Sawley Abbey >> 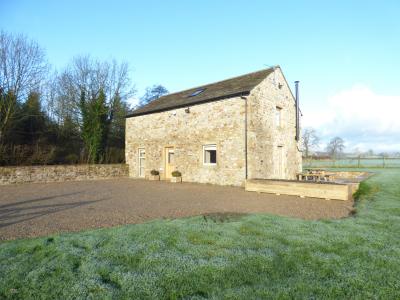 This recently converted barn conversion offers comfortable accommodation for up to five people across three bedrooms in the heart of the Ribble Valley.
Sleeps 5 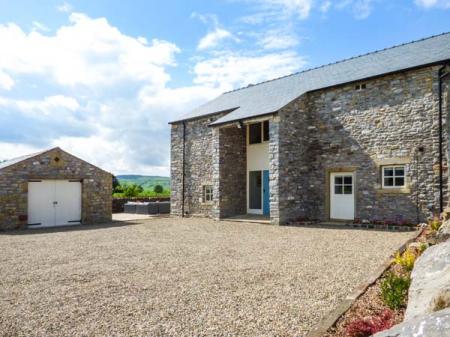