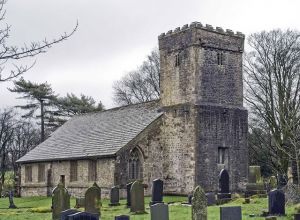 Bracewell, St Michael's Church
Bracewell is a small village just northwest of Barnoldswick, Lancashire. The church of St Michael's is a lovely old Norman building, dating to around the year 1100. It was not established as a parish church, but as a private chapel for the Tempest family.

The most interesting feature is probably the south doorway, which is typically Norman, the chancel arch, also Norman, and the tower arch, which dates to the 14th century and is a good example of the Pointed Gothic style.

Very little of the original medieval glass remains, but there are fragments of 14th-century glass depicting coats of arms of the local gentry. The simple font is probably also Norman.

The nave pews are by the famed Kilburn woodworker, Rober Thompson of Kilburn, aka 'The Mouseman', and show Thompson's favoured mouse motif.

As of this writing, the church is open afternoons throughout the year.