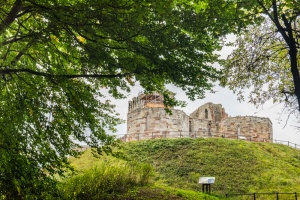 The striking remains of a 14th-century stone keep stand atop an 11th-century castle mound on the edge of Stafford. The castle is within a remarkable system of earthworks enclosing 2 large baileys and a now-vanished settlement.

In the turbulent aftermath of the Norman Conquest, the new Norman lords of England needed to control their new territory. William the Conqueror ordered a system of earthwork defences constructed at Stafford to keep the rebellious natives in check.

In 1100 the Norman lord Robert de Toeni (Robert of Stafford) built a timber fortress atop the high motte, with a pair of large bailey enclosures to house secondary buildings and a new settlement outside the baileys, protected by yet another earthwork enclosure. In total, the castle defences covered 14 acres.

The combination of 2 large baileys and a third enclosure protecting a settlement makes Stafford Castle quite unusual for the Norman period. Within the inner bailey were timber buildings for such essentials as kitchens, a stable, brew-house, granaries, and a chapel.

For the next few centuries the fortunes of the Stafford family were linked to the castle and town.

When Ralph Stafford became the 1st Earl of Stafford in 1347 he had the earlier timber structures rebuilt in stone, with a large keep on top of te motte. He added the battlements a year later, after receiving permission to crenellate from the king. 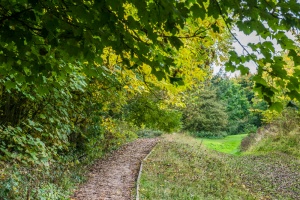 The inner bailey ditch and bank

More changes came in 1444 when Humphrey Stafford was created Duke of Buckingham. The new Duke extended the stone castle and enhanced the residential quarters to make them suitable for a man of his standing.

The castle played a pivotal role in the Wars of the Roses, when in 1485 Henry Tudor, Earl of Richmond, met here in secret with Lord William Stanley to forge an alliance against Richard III. Stanley, ostensibly Richard's supporter, agreed to side with Henry, and at the Battle of Bosworth, when his intervention might have swung the battle in the king's favour, he kept his men out of the conflict, assuring Henry's victory.

Henry's granddaughter, Elizabeth I, came to Stafford Castle in 1575, and she and her court were entertained for dinner. Subsequent generations of Staffords let the castle decline in favour of other residences.

Then in 1610 the crown seized the castle as security for debts amassed by Edward Stafford. Edward died here in 1625, and his widow, Lady Isabel, continued to occupy the castle as late as 1634. Parliament captured the castle in 1643 and destroyed the defences so it could not be used against them.

Seventeenth-century diarist Celia Fiennes wrote that the castle 'is now ruinated and there only remains in the hill the fortification trenches that are grown over with green ...' 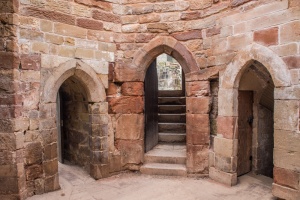 The castle might have remained a ruin were it not for the Jerningham family, who inherited the Stafford Barony, cleared the detritus of centuries, and rebuilt the east wing on the 14th century foundations.

The castle was finally abandoned in the 1950s, and the upper part of the keep were pulled down for safety's sake following a tragic accident in 1962, when a teenager suffered a fatal fall. The castle was restored from 1978 by Stafford Borough Council, who added the modern visitor centre.

Stafford Castle is quite well signposted from major roads around the town. Even though I was following my trusty satnav I would have found the castle just by following brown tourist signs. Though the castle site is just east of the busy M6, the site seemed quiet, like a peaceful enclave of woods and fields on the outskirts of the town.

Even before you reach the castle itself there is something to see; near the modern visitor centre is the recreation of a medieval garden, enclosed within a high hedge. The garden is divided by a trellised walk and trimmed hedges into separate garden areas, each planted with herbs and decorative plants known to have been used in medieval times.

A lovely garden seat stands on a small rise in one corner of the garden, providing a shady place to sit and enjoy the quiet. From the visitor centre a gate gives access to woodland, with a trail leading past the earthworks that are all that remains of the outer castle defences.

Another trail leads away from the castle towards the site of the former medieval village, now buried beneath the fields. The trails around the site are arranged in rough sequence, so you can follow a walk through time, from the late 11th century to the present day.

When you emerge from the woods and catch your first view of the castle the first thing you notice is just how elaborate the earthworks are. Seldom have I seen such a large and extravagant system of ditches and banks defending a castle site.

Every time I found myself thinking, 'oh, it's just a folly', I'd see another example of original medieval construction. Enough original detail remains to make the castle a very striking building. The castle is open year-round, though hours are limited in winter. Entry is free, though there may be a charge for special events. 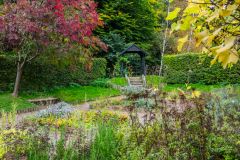 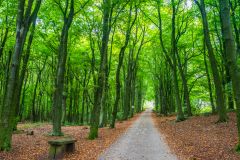 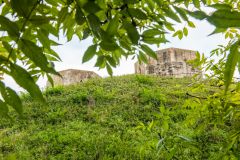 More self catering near Stafford Castle