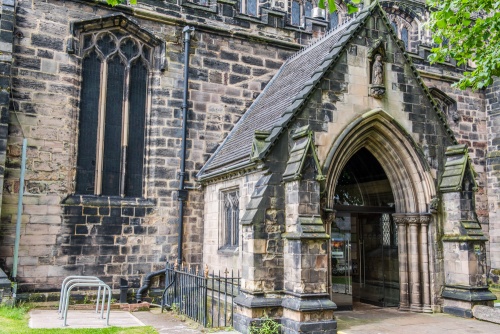 Around the year AD 700 St Bertelin, or Beorhthelm, established a hermitage at a place called Bethnei, which in time became the town of Stafford. Bertelin, whose name gradually took the form 'Bertram' in some areas, later moved his hermitage to Ilam, in Derbyshire, where his shrine became a popular place of pilgrimage. 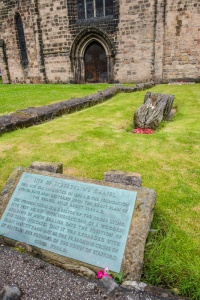 The foundations of
St Bertelin's Chapel

Sometime around AD 1000, a stone chapel was built on the site of Bertelin's timber chapel. The foundations of the stone chapel have been exposed outside the west tower of the present church.

The stone chapel was rebuilt on a grand scale in the 13th century, when a south aisle and clerestory were added. The chapel was later used as a council chamber and a school, before it was pulled down in 1801 to allow more room for burials in the churchyard.

We do not know when the chapel was joined by a large stone church, but fragments of Norman stonework suggest that it was shortly after the Norman Conquest. The first church was rebuilt in the late 12th and early 13th century, and was joined to St Bertelin's chapel via a doorway in the west wall.

St Mary's was a collegiate church, served by a college of 13 canons under a dean. Each canon had to say mass daily, so the church was furnished with at least nine altars in side chapels around the church.

The college also had to pray for the royal family and their ancestors. The chancel was set aside for this purpose, while the townsfolk had the nave, with a nave altar at its east end. Screens divided the church into areas for the canons and the parishioners. 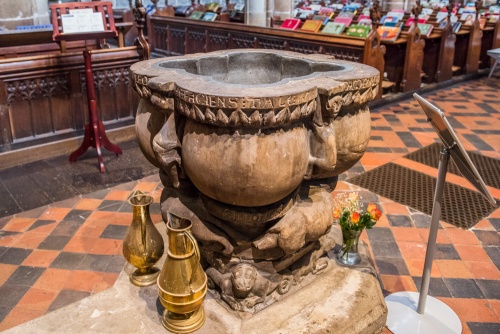 In 1548 colleges like St Mar's were abolished by Edward VI. The entire church was used for the townsfolk, though the screens remained until 1841, when the church was given a comprehensive restoration by Sir Giles Gilbert Scott. Architect AW Pugin, the man responsible for the Palace of Westminster in London, called Scott's work 'the best restoration ... in modern times'.

In 1593 the spire topping the tower collapsed in a storm, damaging the south transept. The tower and transept were repaired, but the spire was never rebuilt. At the time it was said to be among the tallest in England.

Probably the most interesting historic feature of St Mary's church is the superbly carved font placed at the west end of the nave. The design is very unusual for an English church, with 4 semi-circular bowls joined together like a huge four-leaf clover.

The underside of the font bowl is carved with unusual and grotesque figures, strange beasts like monkeys climbing the sides of the bowl, while lions curve around the base of the bowl, whose base is carved with peculiar creatures with one head for two bodies. The style is almost unknown in England, having more in common with Byzantine art than British tradition. 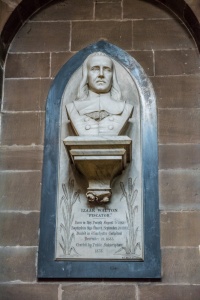 On the wall is a memorial to Isaac Walton, born in this parish and baptised in this church on 21 September 1593. Walton is best known for his popular Book, 'The Compleat Angler'. He was buried in Winchester Cathedral in 1683, but residents wanted to honour one of their famous sons, so erected a suitable memorial by public subscription in 1878.

On the wall is a very fine memorial brass to William Palmer, who died in 1683.

Another excellent memorial is that of Thomas Clifford (d. 1787) and his wife Barbara (d. 1786) carved by John Moore. Clifford's epitaph reads in part, "His life was a pattern of every Social and Moral Virtue, And his Death of Heroic Patience, Resignation, and Christian Piety".

Tucked into a corner of the north transept is the most interesting memorial, an chest tomb to Sir Edward Aston and his wife Joan. The Aston's effigies have been badly damaged (Sir Edward is minus his head for one thing), but the effigies and carvings of weepers and heraldic shields around the base of the chest are beautifully rendered. Legend says that the tomb was damaged when it was used to support a wooden jury box when St Mary's was used as an Assize court during the 18th century.

One of the pleasures of exploring St Mary's church is the beautifully carved pew ends, most of them installed during the church restoration by Sir Giles Gilbert Scott in 1841. The figures are as diverse as they are vividly carved, with depictions of a crowned head, mitred bishop, winged angels, eagles, a woodpecker, and at least three carvings of a Green Man, a figure with foliage emerging from its mouth.

I came to Stafford specifically to see the Ancient High House museum, but when I saw the tower of St Mary's peeking out from behind the timber-framed High House I knew i had to stop and explore. I'm glad I did, for St Mary's is a beautiful historic building, and well worth taking the time to visit.

As far as we can determine the church is usually open daylight hours. There was a friendly volunteer on duty, and once she saw that I was interested in the pew end carvings she found me a free leaflet and answered all my questions. 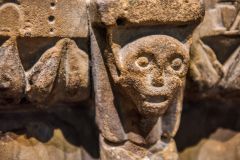 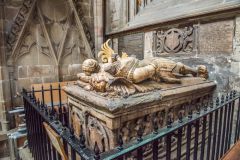