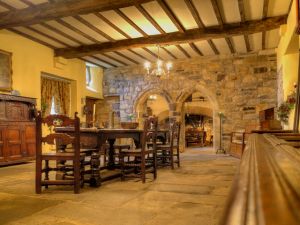 The major rooms include the original 17th-century kitchen and a large Great Hall, the centre of manor life. The interior features a collection of old oil paintings, porcelain, and historic oak furniture.

The manor is set in attractive gardens and meadows that provide a habitat for old varieties of English wildflowers. There is also a Nuttery; a nut orchard which is home to lovely wildflowers in season.

Washington Old Manor incorporates bits of the medieval hall which was home to George Washington's forebears, and from which the Washington family took its name. The house stands two storeys high and is built of coursed sandstone with a pantiled roof.