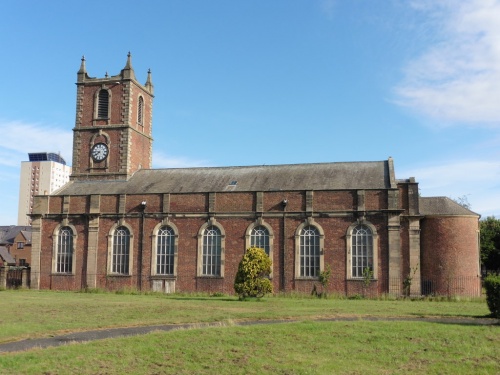 Sunderland, Holy Trinity Church (c) Dave Kelly
An attractive early 18th-century church of brick and stone. This Grade-I listed building was erected in 1718 and extended in 1735 with the addition of an apse and large Italianate window. The exterior presents a fascinating picture of the transition between Queen Anne style and early Georgian taste.

Much of the interior is original to the Georgian period, with perhaps the most striking being the Baroque style chancel arch. The furnishings are elegant and richly decorated, with a light, spacious feel to the interior.

There is a lovely font with an elaborately carved cover and a rather grand memorial to the Reverend Robert Gray (d. 1835). Gray served as rector from 1819. He was known for his work with the poor people of Sunderland, and he died after catching typhus which he caught while visiting sick parishioners.

Before Holy Trinity was built residents of Sunderland had to attend worship in the parish church of St Michael at Bishopwearmouth. In the early 18th century the population of Sunderland increased rapidly, and St Michael's could not handle the growth. In 1712 local merchants launched an appeal for their own parish served by a new church.

Funds were raised by public subscription, and a site was chosen on the Town Moor. The newly formed parish of Sunderland took in what is now the East End.

It is not clear who designed Holy Trinity. Two people who were certainly involved were Daniel Newcombe and William Etty, a woodcarver who is known to have designed other buildings in the north of England. Newcombe was named the first rector of Holy Trinity and probably played a hand in designing the church.

The most striking feature of the new church was a west tower, with a large clock face on three sides. Set into the west face were three large oak doors, which are still intact. The original church had a square east end, with no chancel. Newcombe changed that in 1835 when he added a semi-circular apse.

In 1803 the church roof was raised to make space for a gallery. The seven side windows may have been added at that time, but may also be original features.

The Hero of Camperdown

Inside the entrance porch is a plaque commemorating Jack Crawford, the Hero of Camperdown. The plaque was brought here from the house where Crawford was born in 1775. Crawford was a native of Sunderland's East End, and a sailor aboard the HMS Venerable at the Battle of Camperdown in 1797 when the English fleet defeated a Dutch fleet, capturing 11 ships.

The Venerable came under heavy fire during the battle, and Dutch shot partly felled the mast, causing Admiral Duncan's personal flag to be lowered. Lowering the flag was a recognised message of surrender.

Crawford, despite facing heavy fire, climbed up what remained of the mast and nailed the Admiral's flag to the top. For his heroism, he was presented to the king, and awarded a life pension. The people of Sunderland gave him a silver medal.

Tragically, Crawford descended into poverty and drink and had to sell the medal. He died in a cholera outbreak in 1831 and was buried in an unmarked grave. In 1888 a headstone was erected in his memory in the churchyard of Holy Trinity, and two years later a statue to the Hero of Camperdown was erected in Mowbray Park.

From the porch, you pass into a vestibule, where you find the marble font, covered by an ornate wooden cover carved with cherubs. In one corner are a pair of 1721 collection boxes and Victorian churchwardens staves.

One very unusual feature of Holy Trinity is the right-hand west door, which leads straight into the church vestry. The vestry is almost always located at the east end of the church, near the chancel, where priests change into their vestments for services. So why would the vestry be at the front of the church, so far from the chancel, and why would it need a separate outside entrance?

They needed a place to meet and administer parish business, so they met in a chamber in the church, with direct outside access. The church vestry served as the council chambers until the new borough of Sunderland was created in 1835. In the vestry is the oak table where the councillors sat.

Above is the gallery, library, and choir vestry. The church library was very probably the first public library in Sunderland and still has its original Georgian desks and bookcase. So here inside this lovely Georgian church, you have Sunderland's first council chamber and its first library. Some historians think that the town's first fire engine was also stored inside the church as well!

On the front facade of the galley is the royal coat of arms of George I, beside the arms of the Bishop of London and the Bishop of Durham.

Other original Georgian features include the altar rails and the eagle lectern.

Holy Trinity is no longer in regular use for worship and is cared for by the Churches Conservation Trust. It has recently been undergoing conversion into a community cultural venue.

The large image with this article is (c) Dave Kelly, republished with gratitude under a Creative Commons license