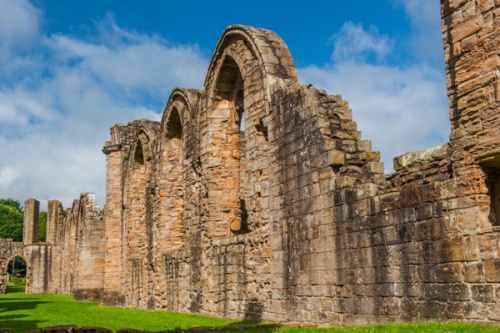 Finchale Priory is a 13th-century Benedictine monastery built by the monks of Durham Cathedral on the site of a 12th-century hermitage founded by St Godric of Finchale. The priory later served as a summer retreat for the monks, an escape from the busy life of Durham city. 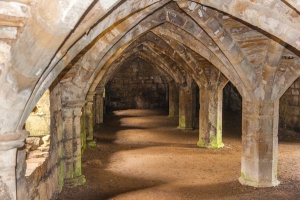 Godric (or Goderic) was an interesting character; a sailor - some say a pirate - who retired from the seas and adopted a religious life. Born in Norfolk around 1065, he worked as a pedlar, then became a sailor. He may have been captain of the ship that carried King Baldwin I of Jerusalem to Jaffa in 1102.

He visited Lindisfarne, possibly to visit St Cuthbert's shrine. There he underwent a religious conversion and gave up his seafaring life. He went on several overseas pilgrimages and worked for a time as a humble doorkeeper at St Giles Hospital church in Durham.

In 1115 he persuaded Ranulf Flambard, the powerful Bishop of Durham, to grant him land at Finchale to establish a hermitage, in a loop of the River Wear. There he lived out the final 60 years of his life as a hermit, establishing a growing reputation for piety and wisdom.

He is known for his simple lifestyle; he slept outside in all weather, using only branches for protection from the elements. Leaders such as Thomas Becket, Archbishop of Canterbury, and Pope Alexander III sought his advice. He was never formally canonised, so the term 'saint' is a bit of a misnomer. 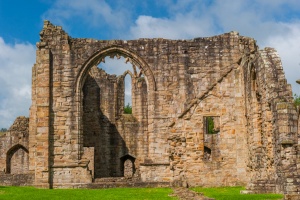 Ruins of the priory church

After a long illness, perhaps brought on by the hardship of his self-imposed ascetic lifestyle, Godric died in 1170. He was initially buried at Durham Cathedral, then his remains were transferred to the chapel of St John the Baptist at Finchale.

Two monks from the Cathedral came to Finchale, where there was already a fish-pond, mill, and chapel. It was only in 1296 when Bishop Hugh Pudsey and his son Henry endowed Finchale as a full-fledged priory, with 8 monks and a prior. The first Prior of Finchale was Thomas, a sacrist at Durham.

Construction of the priory was a long process, and buildings on the site have been identified from the late 12th century to the mid-16th century, but the earliest surviving stonework dates to 1196. These would have been temporary structures used by the prior and monks while the more permanent priory buildings were constructed.

The main buildings date to 1237, and the church was completed in 1277. Partial wall paintings can be seen on the piers of the church nave, but the paint is faded and difficult to make out. The nave arches show well-preserved tracery, and the carved capitals are highly decorated. A double piscina is set in the south wall of the priory church, and two seats of a sedilia have survived. 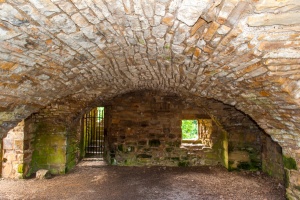 Finchale was never wealthy, and during much of the medieval period there were four permanent monks in residence. Every three weeks another four monks would travel to Finchale from Durham Cathedral for a rest, so in a sense, Finchale was a holiday retreat for Durham. Apparently, the restrictions on the monks at Finchale were loosened, so that those on retreat probably cut loose a bit from their normal strict regime. One wonders what they got up to?

Like other monastic establishments, Finchale was dissolved by Henry VIII, and the complex of priory buildings fell into disuse. During the 18th century parts of the site were 'landscaped' to create a more romantic, or picturesque ruin that appealed to the sensibilities of the time. To the west of the main priory ruins is a 17th-century barn incorporating timbers from earlier monastic buildings, probably 15th century.

On the north side is Priory Farmhouse, whose roof is built entirely of timbers felled in 1369. The farmhouse was originally connected to the old priory mill, and the course of the mill stream can be seen. Fragments of monastic stonework can be glimpsed in the farm buildings, including trefoil windows and carved pier capitals. 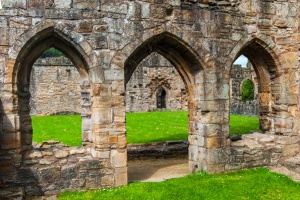 Arches to the cloisters

Finchale Priory is in the care of English Heritage, but the site is on private land, beside a camping and caravanning site with a gated entrance system. You can pay for parking (£3 when we visited) or park higher up the lane and walk down to the priory site, which is what we did.

In theory, the priory grounds opened at 10 am, but the gate was open when we arrived well before that time. I asked in the camping kiosk, and the owner of the site said the grounds are usually left open, despite the 'official' opening hours. You can also take a footbridge over the river to the far bank where there are lovely walking trails and excellent views of the monastic buildings on the near bank.

The location is utterly wonderful, and you can see why Finchale was considered a place for the monks to rest and recharge their batteries. One drawback to visiting is that there are not any obvious information panels around the site, so it is hard to really get a sense of what the various parts of the ruins were used for, or how the priory developed over time.

The walls of the priory church still stand to a good height, but for me, the best feature by far was the vaulted undercroft of the frater in the south range. This is a wonderfully atmospheric space, with ribbed vaulting dividing up the interior into a series of bays.

At the east end of the church, contained within the later presbytery, are the remains of the chapel of St Godric, where you can still see remnants of the saint's tomb.

Finchale is a wonderful historic site. Though not large, it is well worth a visit, if only for the atmosphere; I can imagine being a monk here! 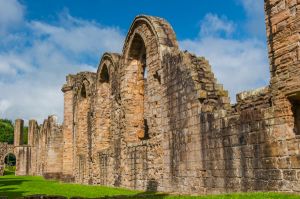 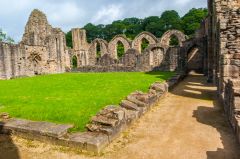 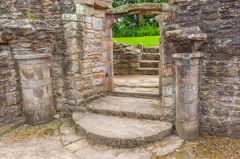 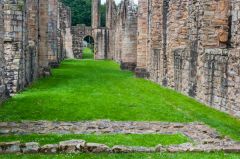 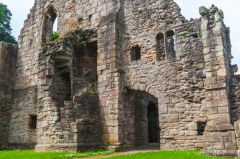 More self catering near Finchale Priory