HERITAGE HIGHLIGHTS:   Remains of the 7th century Saxon church are incorporated into the chancel of the current church 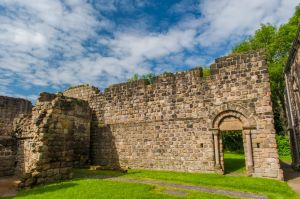 Jarrow Monastery
Jarrow's monastery of St Paul was one of the most influential centres of learning in the late Saxon era, with a reputation that spread across Europe. The monastery was established by Benedict Biscop, a Northumbrian noble who lived from about AD 628-690. Biscop is said to have been religiously inspired after a visit to Rome.

Jarrow is best known as the home of the prolific 8th-century chronicler, the Venerable Bede. Bede was a monk at both Wearmouth and Jarrow from the age of seven until his death in AD 735. During that time he wrote some of the most influential works of his time, including the Ecclesiastical History of the English People, the first serious attempt to record the history of Britain.

In the centuries following Bede's death the monastery declined and might have disappeared altogether if it were not for Aldwin, prior of Winchcombe, Gloucestershire. Prior Aldwin was inspired by reading Bede's History and undertook to visit the holy sites of Northumbria. When he found Jarrow in decay, he applied to the Bishop of Durham for permission to refound the monastery. This was granted, and around 1070 Aldwin rebuilt the Saxon abbey on a Benedictine plan.

St Paul's church was begun in AD 681, and parts of that Saxon building still survive as the chancel. There were actually two churches serving the monastic community, and the larger of the two is now buried under the nave of the current church.

St Paul's at Jarrow is one of the most studied monastic sites in Britain, and as a result, we know a lot about how the site developed and how the monks lived there.

Though owned by English Heritage, Jarrow Priory is operated by Bede's World, which is only a short stroll from the monastery. Bede's World is a museum dedicated to the Venerable Bede, and contains a wealth of information on this remarkable man, and includes interactive exhibits aimed at giving visitors a real sense of life in Saxon Britain.

More self catering near Jarrow Monastery >>