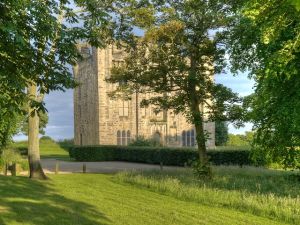 Hylton Castle
Hylton Castle was a medieval fortified manor house. The only remainder of the castle is the grandiose gatehouse tower, which originally stood at the west gateway to the house. The gatehouse was constructed around 1400 by Sir William Hylton and acted as the main residence for the Hylton family through the 16th century.

In an intriguing touch, there are statues of men at arms lining the parapets of the west front. Were they meant to fool an attacking enemy into thinking the castle had more defenders than it actually did?

That seems unlikely, and a far more logical explanation is that they were simply meant to be an indication of status. The west front is richly decorated with coats of arms and other heraldic symbols, including the white hart of Richard II.

In the 18th century, Baron John Hilton (note how the family name changed to its more modern spelling) added a pair of crenellated wings to the gatehouse. These were demolished in the 19th century, leaving the gatehouse as we see it today.

The castle is accessible at any time (grounds only).

More self catering near Hylton Castle >>