HERITAGE HIGHLIGHTS:   An ancient church built on a stone circle - two historic sites in one! 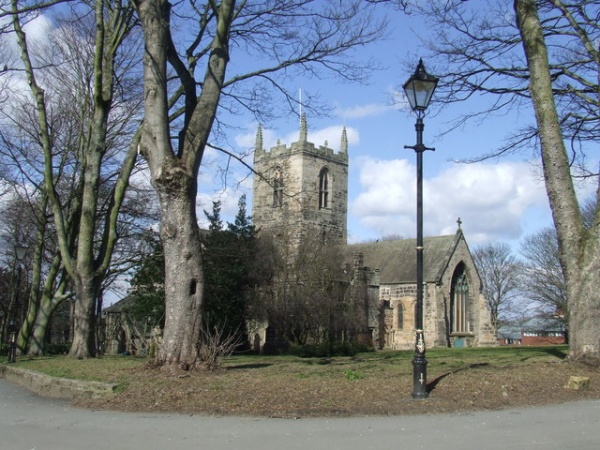 St Michael's is composed of a late 12th and early 13th-century chancel, with a primarily 14th-century nave, to which has been added 19th-century aisles. There are two vestries; one 15th century, and a second 19th-century version. The building is of sandstone, topped with a roof of slate from Westmorland.

But those are just facts and figures and do not prepare you for the wonderful variety of historic treasures that Houghton's parish church has to offer.

The first Christian church here dates to the late Saxon period. The original Saxon doorway with its carved tympanum can be viewed through a glass panel set into the floor of the church. The first Saxon/Norman church was destroyed by Scots under Black Douglas in 1318/19. The church was rebuilt, much of it on the original foundations.

Another interesting window is on the north wall, near the servery, where one panel shows Jesus wearing what appears to be a stetson, or cowboy hat!

The font is Norman, the choir stalls Victorian, and there is a small Norman window in the chancel. Also in the chancel is a curious carving of intertwined serpents known as the Houghton Beasts or Houghton Dragons. This carving is probably older than the church and was brought here from someplace else. There is a small consecration cross on the north wall, while on the south wall is the tomb of Marjorie Bellasis, a friend of Bernard Gilpin.

In the south transept, also known as the Gilpin Transept, is Gilpin's table tomb. This was originally set before the high altar. Beside the tomb are a pair of small tombstones known locally as 'the twins'. These were brought inside the church from their original place in the graveyard and commemorate a pair of local girls who died young.

Also in the south transept are a pair of knight's effigies. One is Sir John le Spring, the other is Sir Roland Bellasis, who fought for Henry III at the Battle of Lewes in 1264.

The west window is known as the Gilpin Window, for the stained glass panels illustrate scenes from the life of Houghton's most famous rector. Here you will see depictions of Gilpin founding Kepier School, feeding the poor, preaching in remote areas of Northumberland, and offering his horse to a woman whose own horse had died.

STONE CIRCLE AND ROMAN TEMPLE
Church renovations in 2008 revealed that large whinstone boulders lay under the church floor. Currently accepted theory is that these boulders formed part of an ancient stone circle or burial cairn, suggesting that perhaps St Michael's was built on a site that already had deep religious or ceremonial significance to the local inhabitants.

Further excavation under the tower revealed very large Roman stones, perhaps originally part of a temple or other civic building. Though the presence of the stones is not conclusive, it does suggest that the site was in use for thousands of years, and had a special significance, such that it was used in turn by several different religions and cultures.

Excavations under the church also revealed large numbers of bones, originally contained in a series of brick and stone vaults. A Norman south doorway and threshold stone were also rediscovered. One of the most interesting features was evidence of fire.

This suggests that there is some truth to the theory that St Michael's was burned by James Douglas ('Black Douglas', or 'guid Sir James' to the Scots) who ravaged the region on a raid towards Hartlepool in 1319.

BERNARD GILPIN
Known as the Apostle of the North, and the Father of the Poor, Gilpin is Houghton-le-Spring's most famous resident. Gilpin was a native of Westmoreland, raised at Kentmere Hall, near Kendal. A nephew of Cuthbert Tunstall, Bishop of Durham, Gilpin was educated at Kendal and Queen's College, Oxford.

Originally a strong adherent to traditional Catholicism, Gilpin seems to have undergone a conversion to the new Protestant teachings. His future seemed secured when in 1552 he preached a sermon before Edward VI at Greenwich.

He became an active campaigner against abuses by church officials in Durham diocese, and as a result, was accused by those same officials of theological heresy. The charges were dismissed as being more likely brought about by malice than by any theological malfeasance.

Gilpin was appointed rector of Houghton le Spring in 1557 or 1558, at a time when Houghton was one of the largest parishes in all of England, including 16 villages and covering 24 square miles. He served the parish from 1557 to his death in a curious accident in 1583 (more on that in a moment).

At a time when many northern parishes were in the hands of absentee rectors, Gilpin was famed for his generosity and care for not only the people of his own parish but for the wider community. He was known to ride far and wide to preach in places where most inhabitants had never seen a priest before.

Stories abound of his generosity, including one famous episode where he is said to have given his horse to a local woman whose own animal had died just when it was needed for ploughing the fields.

One of the more notable features of Houghton life, the Houghton Feast, or Ox Roast, was said to be initiated by Gilpin, or to have been founded as a celebration for his escape from a charge of heresy.

Late in the reign of Queen Mary, he was charged and required to appear before Mary's interrogators. On his way he fell from his horse and broke his leg, thus was unable to appear. The accident saved his life, for Mary died soon after, and all charges were dropped.

It seems more likely that the original Houghton Feast actually dates to the 13th century as a form of Michaelmas celebration. Gilpin may not have founded the Feast, but he certainly knew how to celebrate it; he was known to feed his parishioners and their families every Sunday from Michaelmas to Easter, and he regularly gave a hog or bullock to feed the poor of Houghton parish.

On these Sundays, he held 'open house' at his rectory and would feed anyone, local parishioner or complete stranger. He declined advancement in the church, preferring to remain a country rector.

In early 1583 Gilpin suffered an unfortunate accident when he was knocked down by an ox in Durham market. He never fully recovered, and on 4 May, this remarkable man died. He was buried under an altar tomb in the south transept of St Michael and All Angels church.

The Gilpin family crest of a boar and oak tree was later adopted by Houghton Urban Council as its official coat of arms.

HOUGHTON FEAST
The tradition of ox roasting died out over the centuries but has recently been reintroduced as an occasional local celebration. The ox is roasted on Feast Sunday, in late October, and ox sandwiches are offered for sale on Feast Monday. Proceeds from the sale go to help local charities. I suspect Bernard Gilpin would have approved.

THE GILPIN THORN
Near the Old Rectory is a thorn tree, known as the Gilpin Thorn. This tree is said to have been grown from a cutting of the Glastonbury Thorn brought back to Houghton by Bernard Gilpin. The Glastonbury Thorn stands in the grounds of Glastonbury Abbey and traditionally is said to have sprouted from the ground when Joseph of Arimathea struck his staff upon the earth (or, alternatively, that it was a tree simply brought from the Holy Land and planted here by Joseph). Unfortunately, the original Gilpin Thorn was destroyed by vandals, but the current tree was grown from seeds saved from the original tree.

KEPIER HALL
Within the grounds of St Michaels is Kepier Hall, founded as a school in 1574 by rector Bernard Gilpin and a London merchant named John Heath. Its original name was the Royal Kepier Grammar School, and it was funded in part with tithe money formerly due to the Hospital of St Giles of Kepier in Durham.

The name Kepier comes from Kipe Weir, or a fish trap set on the River Wear by monks. Masters of Kepier Hall had to be graduates of Queen's College, Oxford. In an interesting historical footnote, in 1658 students of the Kepier school were required by statute to practice archery one day every week.

The school operated in various forms until 1923 and was named a Grade II listed building in 1950. Much of the current structure is 18th century, but quite a bit of the original 16th-century building remains. It now serves as a general-purpose hall and meeting place.

THE HOUGHTON ALMSHOUSES
Next to the Kepier School, and also within the church grounds, are the Davenport and Lilburne Almshouses. This row of six almshouses was created in the late 17th century by George Lilbourne, a school governor, and later doubled in size by George Davenport, Rector of Houghton-le-Spring.

A founder's p[laque outside the almshouses says "GEORGE LILBURNE ESQ. BUILT THE MOIETY OF THIS HOSPITAL AT HIS OWN CHARGE, AND ENDOWED IT WITH TEN POUNDS PER ANNUM FOREVER FOR THE MAINTENANCE OF THREE POOR PEOPLE. ANNO DOM. 1668." In 1978 the original six dwellings - which must have seemed very comfortable by late 17th century standards - were converted into two, which must have been a huge relief to the residents of that pair of houses!

Other notable rectors of Houghton:

1483 – Henry Keeling – Keeling fortified part of the Rectory. The only trouble was that he did it without permission, so he was forced to obtain a Durham pardon licence to crenellate by the Bishop of Durham.

1661 – William Sancroft - become Dean of St Paul's Cathedral, and later Archbishop of Canterbury. Sancroft School on Dairy Lane is named for him.

1677 – Henry Bagshaw - served as Chaplain to the British Ambassador to Spain and Portugal. Bagshaw's memorial is in the south transept.

1943 – Hugh Ashdown – Bishop of Newcastle, and Provost of Southwark Cathedral

In January 2013 Houghton-le-Spring church was awarded a Red Rose award by Visit England, the highest award possible under the Places of Interest Quality Assurance scheme.

Photo of St Michael and All Angels is © Malc McDonald, republished with gratitude under a Creative Commons license

Nearest Accommodation to Houghton-le-Spring St Michael and All Angels:

More Hotels near Houghton-le-Spring St Michael and All Angels