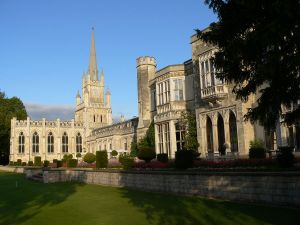 Ashridge
In 1283 Edmund, Earl of Cornwall, founded a monastic house of the Bonhommes order at 'Assherugge'. The monastery was re-endowed by Edward the Black Prince and gained a reputation as a centre for scholarly debate and learning. When the college of monks was dissolved in the Reformation, Henry VIII bestowed the estate on Princess Elizabeth, later Elizabeth I.

Elizabeth spent 8 years at Ashridge, and it was here that she was arrested by her half-sister Mary in 1554 and taken to the Tower of London.

Elizabeth survived to become queen on her sister's death, and the estate remained in Crown hands until her death in 1603, at which time Thomas Egerton, later Earl of Bridgewater, bought the estate.

His descendant, the 2nd Duke of Bridgewater, became popularly known as the Canal Duke for his pioneering in building canals for transport purposes. The Duke's successful ventures into canal building provided the necessary funds for the building of the current Ashridge House from 1808-1825.

The Duke employed architect James Wyatt to create a Gothic Revival house, surrounded by attractive gardens designed by Humphrey Repton. After WWI the house became a hospital for a time, a role it also fulfilled during WWII. In the meantime, the woodland part of the estate passed to the National Trust, in whose hands it is still maintained as a recreational area. In 1959 the house was converted into a business school.

The gardens designed by Repton cover 190 acres and are made up of a number of small garden areas arranged about a large lawned area, with open parkland beyond. Among the restored areas of Repton's garden are a Rosary garden, Armorial Garden, Italian Garden, and Flower Garden. In addition, a new herb garden has been created. The gardens are generally open on weekends and Bank Holidays from Spring through Summer.

Note:
Ashridge houses one of the premier business schools in the world, so house tours are available only during school closure periods in the summer. The gardens, by contrast, are regularly open from Easter to autumn. For current details, check the Ashridge website.

More self catering near Ashridge >>

More bed and breakfasts near Ashridge >>